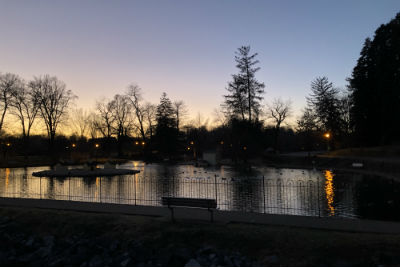 The two juveniles ended up robbing the others at knifepoint and stealing a small amount of cash.

The juveniles were apprehended and taken to Shenandoah Juvenile Detention Center.

On Nov. 14, a 17-year-old, 16-year-old and 14-year-old were arrested at Gypsy Hill Park after brandishing a fire arm and stealing property from a victim.

In early December, police responded to reports of 25 incidents of vandalism to the Celebration of Lights display in the park over several nights.

“It was throughout the park,” Shifflett said. However, most of the damage was done on the west end near the horseshoe pits.

The incidents of vandalism remain under investigation.

Shifflett said that anyone with information about the vandalism is asked to call Staunton Police Department, or report information anonymously to Crimestoppers at 1-800-322-2017.

According to Shifflett, police do not believe the three incidents of crime at Gypsy Hill Park are related.

“It’s a coincidence. It’s certainly not a trend,” she said. 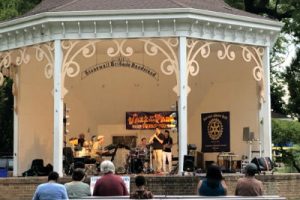 Jazz in the Park at the Stonewall Brigade Bandstand. Photo by Rebecca J. Barnabi.

In August, an elderly out-of-state driver crashed into the duck pond at Gypsy Hill Park. Shifflett said the driver was uninjured after suffering a medical emergency driving south on Spring Hill Road.

Shifflett, who regularly runs in the park herself, said police consider the park a safe environment. Officers patrol the park in teams on bicycles.

But she does offer common sense advice for residents and visitors to the park.

“Be aware of your surroundings. Gypsy Hill Park is one the most frequently patrolled areas,” Shifflett said.

She added that anyone who sees anything suspicious at the park is encouraged to let Staunton Police Department know as soon as possible.