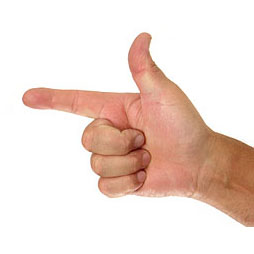 Not making an argument for tighter gun control, but for common sense.

Popular on Facebook the past few days has been a repost about how guns don’t kill people, people kill people, so stop blaming the guns.

OK, let’s have at it. Using me as an example. I’m a hearty guy – can benchpress over 400 pounds, squat 600-plus, run a couple of nights a week at the track doing 40-, 100- and 200-meter sprints, work a couple other nights a week on a heavy bag training in boxing and kickboxing. I could do some damage if unleashed with anger, you could say.

So I come upon a crowd of 30 people intent on doing some damage. I have a main target, go after that person. Let’s say I bodyslam my target to the ground, throw a few effective punches and kicks. The target is down, and bystanders trying to intervene get hit in the fusillade, and some of them go down.

I’ll borrow from the comedian Ron White here: I don’t know how many of them it would take to subdue me, but I’d know how many they would use. Eventually, I’m on the ground, one or two or more people on top of me. Maybe I’m lucky, and my target succumbs to the injuries. I doubt anybody else suffers anything worse than a broken bone.

Now give me a baseball bat and set me loose. My target, poor soul, has no chance. A few of the bystanders become collateral damage. Odds are good that I get my target and do some serious hurting to a bystander or two or three. It ends with me back on the ground, almost guaranteed.

Give me a knife. The potential for harm is at least as good here as with a baseball bat. I’m probably a good bit more effective here with the jagged edges of a knife cutting to the chase, you could say. Maybe I escape after getting my target and some of the bystanders. Maybe one of them wrestles the knife from me and turns it against me.

Now I have a gun. All bets are off. I can beat one person to death barehanded, break a scull or two with a baseball bat, slit throats and jag abdomens and chest cavities with a knife, but a gun is much more lethal. One, I don’t have to risk getting too close to my subject or potential subduers. Two, I can fend off subduers much more effectively with a gun than I can with my fists or a bat or a knife. I can take people on pretty much one at a time with my fists or a bat or a knife; a gun gives me the ability to take on several people in that same amount of time, and with instant deadly force.

In just a few seconds, I am transformed from being a person capable of maybe killing a single person with my fists or one or two people with a baseball bat or a handful with a knife into a machine able to kill dozens of people in literally a minute or two.

It is true that it isn’t the gun, but me, who would have done the killing. It is also true that the gun would have greatly enhanced my success rate.

Again, keep in mind that I’m not arguing here for gun control. This argument advanced by the gun lobby just doesn’t pass the smell test.

Column by Chris Graham. More from Chris at TheWorldAccordingToChrisGraham.com.