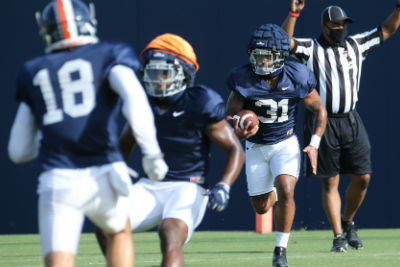 Shane Simpson has had a whirlwind past few weeks, beginning with the last-minute call to transfer from Towson, to picking his new destination, Virginia, from among several interested suitors.

And now, Simpson, a 2018 FCS All-American, is having to get acclimated to a new offense, new teammates, a new school, and practice in the social-distancing era.

The sixth year was granted by the NCAA after Simpson went down to injury early in what would have been his redshirt senior year at Towson in 2019.

After getting that sixth year, Towson joined the rest of the CAA in deciding to shutter football for the fall, looking to a possible spring season.

Simpson didn’t want to take a chance on the spring season not coming, and after throwing his name into the transfer portal, he had interest from the likes of UVA, Texas, Florida State, Penn State, Duke, Wake Forest and Northwestern.

His final two were UVA and Texas, and he made the call on Aug. 1 to head to Charlottesville.

“Everything was real rapid. Had to get all the paperwork and everything situated. But since I got here, they’ve treated me like family, and I can’t thank Coach Mendenhall and the staff and my new brothers enough for like bringing me in,” Simpson said.

The adjustment in terms of scheme hasn’t been all that rough.

“Our offense at Towson was more spread, pro-style offense, and that’s pretty similar to what we do right here. Definitely a lot of zone, like a lot of zone schemes at Towson. It translates over to here. And it’s meshing really well,” said Simpson, who has been practicing with the first unit, alongside fellow top tailbacks Wayne Taulapapa and Indiana transfer Ronnie Walker, whose request for a waiver that will allow him to play this fall was denied by the NCAA, but is under appeal by UVA.

The scheme might be similar, but the speed of the game is a bit different from FCS to FBS.

“I did play against FBS schools, but like, going against them every day in practice is definitely different, in that the speed is definitely a little faster,” Simpson said. “The biggest difference I can tell from the FCS level to the FBS level is the offensive linemen and the defensive linemen. Obviously you have more skilled players at each position. So, I’ll say that’s probably the biggest difference.”

Taulapapa, the leading returning rusher for the ‘Hoos from 2019, with 473 yards and 12 rushing TDs last season, has been impressed with what he has seen from his new teammate thus far.

“He’s a very seasoned player, veteran player. When you see him run the ball, when you see him go out for passes, when you see him block, you can tell he’s been playing the game of football for a long time. Very educated on what’s what, and, you know, it’s really easy for him to pick up the plays,” Taulapapa said.

“It’s kind of nice to have that as a player, that I can learn from, but also teach in a way where we’re both making progress and making an impact on the offense. Trying to gain knowledge from him, and him from me, is kind of our goal right now,” Taulapapa said.

Having Taulapapa and Walker to guide him through has been a big help.

The focus is on the season opener three weeks out down in Blacksburg at archrival Virginia Tech.

Mendenhall and offensive coordinator Robert Anae have been trying to emphasize the running game in camp – in part to make the transition for whoever ends up being the new starting quarterback, Brennan Armstrong or Mississippi State transfer Keytaon Thompson, easier, and also because Virginia happens to have the most veteran offensive line in the ACC returning.

“Coach Mendenhall wants to make sure that we’re running the ball, and we’re doing a really good job of doing that as of right now. Obviously, we’re still trying to build chemistry with everybody. And obviously we have enough time. We got three weeks left before Virginia Tech. I think we’ll be more than prepared,” Simpson said.