Gone, but never forgotten: The building is history, but University Hall memories are forever 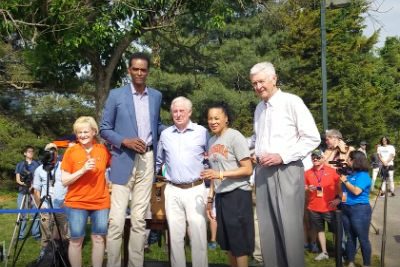 At almost exactly 10 a.m. this morning, storied University Hall was reduced to rubble. Implosion is the technical jargon used. I was fortunate enough to be among the invited media present.

All the fanfare, the reminiscing, the funny stories ended rather unceremoniously, at least in my eyes.

Not quite sure why, either

I was also fortunate to have been invited to Friday night’s “Last Call for U-Hall” hosted by none other than Cavalier legend Ralph Sampson. I mingled among many former Virginia basketball greats: Barry Parkhill, Rick Carlisle, Marc Iavaroni, Richard Morgan and many more, basically everywhere you looked. Even former Cavalier coach Terry Holland was there.

Also on hand was urban legend Tom Hicks, who along with a couple of other cohorts was credited for the message “Ralph’s House” painted on top of University Hall in the wee hours of an April morning in 1979.

There was tons of laughs, many stories, recalling of games, specific plays, opposing players, coaches and even a referee or two. The emotions were mixed. Some laughter, a tear or two, or more. But at the end of the night I think everyone had heard enough stories, made enough toasts and were reconciled that Saturday morning at 10 a.m. it was time to finally say good-bye.

So, sure enough, Saturday morning broke with a glorious sunrise, a perfect day to say farewell to an dear old friend. Again a ‘Hoos Who gathered at Klockner Stadium to view the final act of University Hall. But unlike Friday night’s gathering when a lot of stories about games, players, coaches were bantered about, today that talk was almost nonexistent.

Today it was about the people that made U Hall more than just a basketball arena. It was talking about the gameday personnel, the Monk Binglers, the first public address announcer, Charlie Smith, the legendary walking encyclopedia, Doyle Smith, Ted Davenport.

Today it was about the people of University Hall, the devoted fans who supported the team in the infancy of the building, through some abysmal seasons, to rising to the pinnacle of college basketball both on the men’s and women’s landscapes.

Today I didn’t hear any talk about the night Ralph slammed dunked over North Carolina’s Michael Jordan. Today no one asked, “Were you there the night Richard Morgan scored 39 points against the Tar Heels?”

Heck, not even one word was dared mentioned about the infamous “Hot Dog Night,” especially within earshot of Coach Holland.

Today was perfect. Today was how University Hall was meant to remembered.

Laughter, smiles, talks of what the future holds for the space the building occupied, maybe a tear quickly wiped away.

“It went  perfectly as planned, the building went down gracefully.”