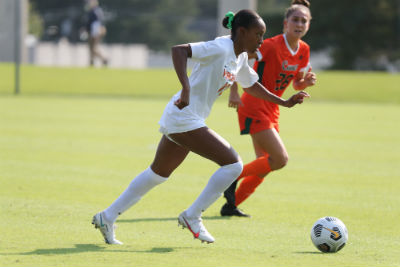 Junior forward Rebecca Jarrett came up big against the Hurricanes for the second straight season, turning in a goal and a pair of assists to help #10 Virginia to a 3-0 victory over Miami on Sunday.

It marks the second consecutive season that Jarrett has turned in two assists against the Hurricanes.

Last season she assisted on the first and third goals for Virginia as the Cavaliers also defeated Miami by a score of 3-0.

Redshirt freshman Cayla White picked up her second win this season as she and junior Michaela Moran combined for the clean sheet.

“I’m really proud of the team today,” said Virginia head coach Steve Swanson. “It was a great win against an ACC team. It was a good three points for us. I thought it was a good performance overall. We had a little bit of a different game plan because of our situation with the number of players we had available. We executed well and got a couple of goals early, which made a difference. We kept our shape well and moved the ball pretty well. We’re happy and there was some progress there. It was good to see some new faces get some time and do well with their minutes.”

Virginia (4-1-1, 2-1-1 ACC) struck quickly, notching two goals in the first four minutes of play, with both coming off assists from Jarrett.

The first came off the foot of Sumpter as the senior midfielder collected a deflected ball inside the six off Jarrett’s initial shot and put it back in the net. The second, Jarrett brought the ball down the right side of the field and sent in the cross that was slowed up by a Miami defender as she unsuccessfully attempted to trap the ball and sophomore Lacey McCormack (Arlington, Va.) tapped it in for the 2-0 lead.

The Virginia defense held the Hurricanes (0-5-0, 0-4-0 ACC) without a shot in the first half, while taking 10 shots of their own with seven on frame and the two goals.

Jarrett extended the lead for the Cavaliers in the 69th minute when she took a one-touch shot off the pass from Lia Godfrey to put the home team on top 3-0. Virginia played the ball out to Godfrey on the left side of the box and she sent the cross in to Jarrett near the penalty mark and the junior redirected the ball with her left foot in past the back post.

The defense would hold down the stretch, allowing only one shot on the afternoon to preserve the shutout. The lone shot from the Hurricanes came in the 79th minute following Miami’s only corner kick of the game.

Virginia will return to action next week, traveling to play the final non-conference matchup of the fall with a match at North Carolina on Thursday.