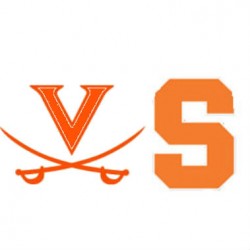 The talk is that they’re expecting a massive crowd in the Carrier Dome Saturday with #2 Virginia coming to upstate New York to face Syracuse.

With an RPI at 42, losses at home to St. Bonaventure and Notre Dame, and a loss on the road at Wake Forest, Syracuse could use some resume enhancement, and with the calendar flipping to February, time is beginning to run short.

Syracuse played Virginia well last month in a 68-61 loss in Charlottesville, trailing by just three at the half, then making it interesting late by going to a full-court press, reminiscent of the press that coach Jim Boeheim used in the 2016 Elite Eight upset win.

‘Cuse, as you likely already know, uses a suffocating 2-3 zone, the kind that gave Virginia fits in the second half at Duke in last week’s 65-63 Cavaliers’ win.

The zone forces the ball into the middle at the foul line, and Isaiah Wilkins, who at the four spot is slotted to play in the high post on the offensive side of the floor, has struggled on that end since suffering a lower-back injury in the second half of Virginia’s 61-36 win over Clemson on Jan. 23, connecting on just one of his six attempts from the floor in the past two games.

If Wilkins struggles early Saturday, coach Tony Bennett may go early to redshirt freshman De’Andre Hunter, who had 15 points on 6-of-11 shooting in 27 minutes off the bench in the win over Syracuse last month.

Syracuse also presents problems for Virginia when it has the ball. The Boeheim offense is at its best when it resembles street ball, with guards and forwards attacking with impunity on dribble-drives.

Frank Howard (18 points), Oshae Brissett (16 points) and Tyus Battle (12 points) put up nice bottom-line numbers in the January loss, even if they weren’t exactly efficient in so doing (shooting a combined 17-of-51 from the floor, and 6-of-20 from three-point range).

The telling number would be the total of three assists that Syracuse had in the January matchup. For most teams, that would be a sign of stagnation on offense, but when the attack is based entirely on breaking down defenders one-on-one with dribble-drives, that’s par for the course.

Syracuse will spread the floor and try to beat Virginia defenders into the lane, and if the first shot doesn’t go in, clean up the offensive boards. The Orange rebounded 51.3 percent of their misses in the first game between the two teams this season, though that only translated into a 17-16 edge in second-chance points.