Justin Fuente on QBs: Hendon Hooker to start, but Braxton Burmeister will get snaps 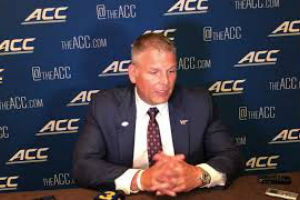 Virginia is set on its starting quarterback for the season opener at Virginia Tech next weekend. And it seems that Virginia Tech coach Justin Fuente has his QB1 – and QB1A.

Hendon Hooker appears to be the starter, but Fuente said this week that Oregon transfer Braxton Burmeister would also get some playing time.

Hooker, a 6’4”, 220-pound redshirt junior, took over as the starter at QB after the Hokies’ 45-10 loss to Duke in September and was impressive down the stretch, throwing for 1,555 yards and 13 touchdowns, with two interceptions, both in the 39-30 loss at Virginia in which he threw for a season-high 311 yards, while completing 61.1 percent of his passes on the season.

Burmeister, a 6’1”, 205-pound redshirt junior, transferred to Virginia Tech in 2019 after spending his first two college years at Oregon, where he made four starts, but was never able to get his feet under him after enduring a coaching change when Willie Taggart, the coach who had recruited him to Eugene, left after the 2017 season for Florida State.

Burmeister only threw 10 passes in mop-up duty in 2018 under new coach Mario Cristobal before transferring out.

Patterson, you may remember, stepped in after Hooker went down to injury in the North Carolina game in October and led the Hokies to a come-from-behind 43-41, 6-OT win in which he threw for 54 yards and a touchdown and added 122 yards and a second TD on the ground.

In his one career start, on Nov. 2 at Notre Dame, Patterson threw for 128 yards and a touchdown and added 77 yards on the ground as the Hokies fell just short of pulling the upset, losing 21-20 on an Ian Book 7-yard score with 29 seconds left.

“You don’t have to imagine too hard a scenario where you have to play with your entire roster of quarterbacks,” Fuente said. “Right now, we’ve got four that have practiced and can go out there and operate what we’re doing. We’ve got three that have played in or have won Power 5 football games, and I think that is a huge asset to us and something that, particularly this year, we may have to utilize.”