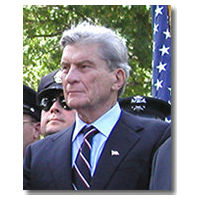 Warner, a five-term senator representing Virginia and former chairman of the Senate Armed Services Committee, offered praise for Kaine’s ability to “reach across the aisle – and even stand up to his own party – on important issues affecting Virginia and our nation,” such as “work on behalf of veterans, service members, and military families.”

This is Warner’s first-ever endorsement of Kaine for state office. Warner will be Kaine’s guest at tonight’s debate.

Warner’s full statement is below:

“I first met Tim more than twenty years ago when he was on the city council in Richmond, and we have been working partners throughout his service at every level of government – as mayor, Lieutenant Governor, and Governor.

“How proud I am of Tim succeeding me on the Senate Armed Services Committee, carrying on this tradition and continuing to gain seniority in the U.S. Senate which benefits Virginia. Tim has followed my example in his ability to reach across the aisle – and even stand up to his own party – on important issues affecting Virginia and our nation.

“This has been particularly evident in his work on behalf of veterans, service members, and military families. I applaud the successful legislation that Tim has passed to increase troop pay, bring down the veterans’ unemployment rate, and expand the Navy’s fleet.

“I am forever thankful to Virginians, who allowed me to serve five successive terms as their U.S. Senator. One thing that service has taught me is that Virginians take great pride in our state’s long history in being home base for so much of America’s defense infrastructure – from the thousands of white hat sailors, and their families, in Norfolk, the Air Force in Tidewater, the Army’s ever expanding base at Fort Belvoir, and the combined military headquarters at the Pentagon in Northern Virginia.

“Tim’s unquestioned integrity and moral character are sorely needed in the Senate at this most unusual time in our nation’s history. Americans, myself included, are fervently seeking to support the election of public servants with those basic but essential characteristics. For these reasons, Tim has certainly earned my vote and total support in this election.”