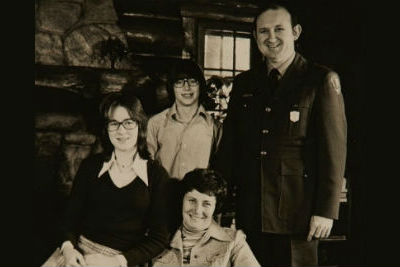 “Our deepest condolences go out to Gary’s loved ones, friends and all whose lives he touched through his service and mentorship,” NPS Deputy Director Shawn Benge said. “Gary had a profound impact and lasting legacy on America’s National Parks. His dedication to the National Park Service mission and service to the American public will be remembered for years to come.”

Everhardt was born on July 8, 1934 in Lenoir, N.C. He graduated from North Carolina State University in 1957 with a degree in civil engineering. Following his graduation, Everhardt began his NPS career as an engineer rising through the ranks to become superintendent of Grand Teton National Park in 1972.

He was appointed as the 9th director of the National Park Service by President Gerald Ford in January 1975 and served through the end of the Ford administration.

As director, Everhardt led America’s Bicentennial planning and celebration, doubled the acreage of land protected as part of the National Park System adding over 30 million acres, primarily in Alaska, and oversaw significant advancements in interpretive programming and visitor services.

After serving as director, Everhardt returned to the field as the superintendent of the Blue Ridge Parkway in 1977, serving for 23 years until his retirement in 2000.

His long list of awards includes the Department of the Interior’s highest honor, the Distinguished Service Award, which he received in 1985.

The headquarters of the Blue Ridge Parkway is also named for him.

Nancy, Everhardt’s wife for 60 years, was often found side-by-side to her husband. She was a fixture in their communities and family, and actively engaged with her adopted NPS family.

Everhardt and his wife are survived by their two children Karen and Phil.