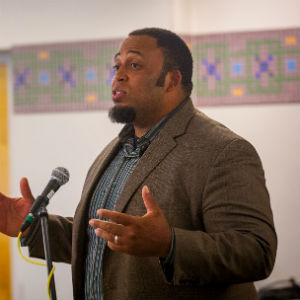 When former NFL center Jason Brown left the St. Louis Rams in 2012 to become a farmer in North Carolina, he admittedly had no idea what he was doing.

He hasn’t let this knowledge deficit stop him from seeking a life of service, however.

Brown started First Fruits Farm in Louisburg, North Carolina, in 2013 after deciding to leave behind a successful NFL career. He was driven by the sacrifice of his brother, Army Spc. Lunsford Bernard Brown II, who died in Iraq in 2003, and by a strong calling that life meant more than the game of football.

In 2014, First Fruits Farm donated more than 100,000 pounds of sweet potatoes and 10,000 pounds of cucumbers to local hunger relief organizations. From planting to harvesting to distribution, the farm relies on donations and volunteers that have helped Brown accomplish far more than he could by his own efforts.

“Every step of the way, whenever there was a problem that we had, someone stepped up. They would give us a call and say, ‘Heard about what you’re doing, don’t know exactly what you’re doing, but could you use this help?’” he said.

Brown’s mission to produce a sustainable source of food for his community has been a leap of faith. The sweet potatoes – a crop he chose for its nutrient density, long shelf-life, and familiarity within the community – were planted for no charge by neighboring farmers. They were harvested by volunteer networks of gleaners and then distributed by the Society of St. Andrews, the Inter-Faith Food Shuttle, and the Food Bank of Eastern North Carolina. Trusting that these connections will allow Brown reach his goals is how he lives a life of obedience and answers his calling.

Brown also sees his mission as greater in scope than providing food for the needy: “We’re not just about giving back. It’s about empowering our local communities as well,” he said.

First Fruits Farm also emphasizes the teaching and mentoring of young people in agriculture. Brown remarked that anyone could help on the farm. That includes his wife, Tay, a dentist, and their four children (the youngest, Lunsford Bernard Brown III, called “Tre,” is only six months old, but the others, including two-year-old Noah, all help on to the farm).

Developing sustainable agriculture provides purpose for all members of the community and healthy, affordable food in an area where one in four children are food insecure on a regular basis. In North Carolina, that statistic is at 26.7%, one of the highest rates in the country, Brown said.

Brown sees the problem of hunger as “an issue of the heart.” Since leaving the NFL, he’s heard from many people who claim that he could have done more with the millions of dollars he would have made as the highest paid center in the NFL.

Brown says, though, that “throwing money” at the problem is a short-term fix. Only through truly committing himself to farming could he inspire others to practice agriculture for the benefit of themselves and their community. Production of locally-grown food is how Brown hopes to combat hunger on a national scale.

“What I believe now is throwing my heart at the problem … By doing this as a grassroots effort, there are literally thousands of youth, thousands of children – it has piqued their interest,” he said.

For the fall of 2015, Brown has set a goal of harvesting ten acres of land to collect 250,000 pounds of sweet potatoes. He hopes the first Great Harvest Festival on Nov. 7 will attract over a thousand volunteers to harvest sweet potatoes and enjoy food, music and entertainment in the evening.

Additionally, he plans to begin growing summer fruits and vegetables and working with public schools to set aside land for growing fruit trees.

First Fruits also distributes seeds to those interested in starting their own First Fruits garden. Since February 2015, the Sow-A-Seed program has mailed seeds all over the world.

The concept of service isn’t new to Brown, a devout Christian. In 2008, he started the nonprofit organization, Wisdom for Life, which promotes biblical literacy and has provided the umbrella organization under which First Fruits Farm operates. In 2010, he won the Rams’ Walter Payton award for his community service, both in the metropolitan St. Louis area and in military and veteran outreach.

But now, in devoting all of his daily working hours to service, he’s found his niche. “All I can say is ‘Thank God,’” Brown said several times during his presentation. “It’s not my work, it’s God’s work.”