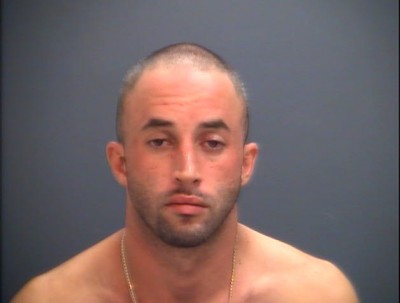 The Waynesboro Police Department has arrested a Scottsville man after an unusual series of unusual events that resulted in him getting bitten by a dog, stuck in a crawl space and then eventually arrested.

Dylan Lewis Martin,  32 years old, is presently facing three charges with more to come after Wednesday afternoon’s bizarre incident.  On August 5 at approximately 4:45 PM, officers stopped Martin’s vehicle, a 2012 Chevrolet sedan, near 2nd Street and Kirby Avenue.  The vehicle turned out to be a stolen rental car from Staunton. Officers had received information that Martin was armed and dangerous, and under the influence of methamphetamine.

Martin drove a short distance and quickly turned into the driveway of a house on Kirby Avenue in an apparent attempt to flee from police. He was contained in the vehicle, but Martin refused repeated commands from police to get out of the vehicle. Martin began screaming incoherently and was obviously under the influence of drugs. While police were in the process of using physical force to subdue Martin, a dog from the residence attacked both the police and the suspect, ultimately biting Martin. In the midst of the confusion, Martin was able to get to his feet and flee on foot from the officers.   Officers then pursued Martin on foot, but lost him in the wood line along a creek bed about 200 yards from the traffic stop, where officers found a load 9mm handgun in the vehicle.

The discovery of the firearm coupled with the psychotic behavior Martin displayed at the scene prompted the Waynesboro Emergency Operations Center to issue a reverse 911 call to residents in a half mile radius in the area to warn them that a dangerous subject was at large.  Virginia State Police responded to the scene with a K9 unit and aerial support from one of their drug eradication helicopters to begin a grid search of the area.

Approximately 30 minutes into the search, a citizen who had received the reverse 911 call notified police that they had seen Martin run into a house in the 1800 block of Shenandoah Avenue. Officers immediately secured the residence and began a search of the house with assistance from the VSP K9 team.  Officers found Martin in a small HVAC crawlspace between the first floor and the basement of the residence.  He had become stuck in the duct work as he tried to hide, and police were unable to get him dislodged. After repeated attempts with no results, the Waynesboro Fire Department was summonsed to cut Martin free. Firemen used a rescue saw to cut a hole in floor from the basement and Martin was ultimately freed.

Upon searching Martin’s pockets during his arrest, police recovered over $400 in cash and a baggie of methamphetamine.  Officers arrested Martin for two misdemeanors, resisting arrest and driving on a revoked license, and one felony, Possession of a Firearm by a Convicted Felon. Further charges are pending lab results.  A citizen also obtained a warrant for Grand Larceny in Staunton as a result of Martin stealing the rental car he was driving at the time of his arrest.

Martin is being held at Middle River Regional Jail without bond.