What about Brennan Armstrong? 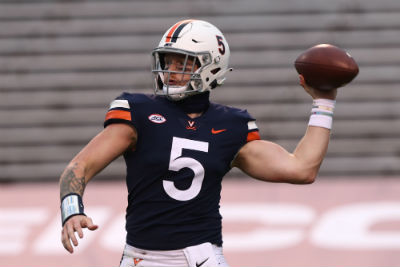 Does this mean Armstrong isn’t available?

Could it be that he will be available, and Bronco Mendenhall and Robert Anae aren’t tipping their hand to make it harder for Miami to know how to prepare?

Anae was able to spring his three-QB rotation on Wake with no tape for the Wake staff to use to figure out how to defend it.

And because of that, and because of good execution by Lindell Stone, Keytaon Thompson and Iraken Armstead, it worked – the offense gained 420 total yards, the second-best output of the season for the unit.

Miami has had a week to chop up the tape and key in on what Virginia did.

If Mendenhall and Anae out and said, that’s what we’re doing this week, advantage: Miami.

Not knowing Armstrong’s status until the teams hit the field for pregame warmups makes it so that Miami has to prepare for two possibilities: three QBs, or one.

Or … Armstrong with Thompson and Armstead in wildcat.

This is slight advantage: Virginia.

Has Miami finally figured out what to do at QB?

The missing piece for Miami teams dating way back to the Al Golden era has been QB play.

Jury is still out whether the one-and-done year with King is an upgrade over what they’d been getting.

What is up with the Virginia D?

It’s got to be frustrating to control the opposing offense on 70, 80+ percent of the snaps in games, and still give up 38+ points three straight weeks.

Easier said than done, but improving the control number into 90+ percent of the snaps needs to be the goal.

How much do they want it?

Have to ask the question.

The past two games were Ws when you looked at the schedule in the preseason. The next two were probably Ls: at Miami, UNC at home.

You lose the ones you thought you’d win, and then you face back-to-back games that are uphill battles, sitting at 1-3, it’s human nature to allow yourself to think, we can play great football the next two weeks and still be 1-5.

Does that thinking seep in and affect effort if the ‘Hoos fall behind early again this weekend?

I wouldn’t fault anybody if it did.

Will you be watching?

I wrote about this yesterday. This is the fifth week in a row that UVA is on the ACC Network, which you have to go out of your way to be able to access, and apparently not a lot of you are.

Wouldn’t fault you if you didn’t tune in. Basketball season is nigh. That one should go our way more.