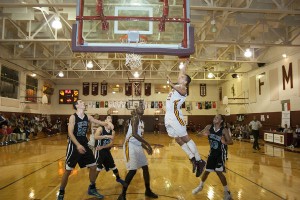 Miller led by as many as eight points in a back-and-forth first half that saw Fishburne, ranked #2 in this week’s NextUp Recruits national postgrad basketball poll, still trailing by four with the ball as the final seconds ticked down. Point guard Jordon Talley (6’0”, 180, Richmond) hit an off-balance three at the buzzer to cut the lead at the break to one at 54-53.

“When the second half started, we got back to us. It was the guys being themselves, getting back in the flow of things,” assistant coach Aaron Drakeford said.

The game was the first for FMS after a lengthy holiday break.

“We had a lot of turnovers, a lot of mistakes on defense. Second half we really cleaned that up. I think the break was a factor. But once we got into the flow of the game, we made things easier for ourselves,” said James Rucker (6’4”, 185, Knightdale, N.C.), who led four Caissons in double figures with 19 points.

Fishburne is off tomorrow as the rest of the tournament field, which includes fifth-ranked Hargrave Military Academy, eighth-ranked Massanutten Military Academy and ninth-ranked Believe Prep, takes center stage at the Shootout.