Fishburne Military School teams competing at Best of the Best 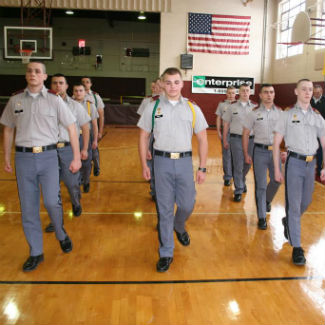 The JROTC at Fishburne Military School is on a short list of elite programs in the Mid-Atlantic competing at the Best of the Best 4th Brigade Championships in Hickory, N.C., this weekend.

Color guards and drill teams from a dozen schools will be represented at the event. Fishburne has sent its Raiders team to the event each of the past two years, but this will be the first appearance for the exhibition drill team and color guard, and with the Raiders making their third straight appearance, it will be a big weekend for the cadets from FMS.

“This is the first time since I’ve been here, and that’s been 20 years, that we’ve been at that level. So it is an honor, not only for the school, but for the cadets to be able to go down and be a part of the competition,” said 1st Sgt. James C. Hensley, a JROTC instructor at Fishburne who serves as the advisor to the FMS Color Guard.

The Color Guard has represented Fishburne at Baltimore Orioles and Washington Nationals baseball games in recent years, and presented the colors for the 2014-2015 season opener for the NBA’s Washington Wizards.

The cadets on the guard and drill teams have to fit their practice time into already busy school and extracurricular schedules, said Blake Justen, a senior from Mentor, Ohio, who has served as commander of the regulation drill team at Fishburne for the past three years.

“We practice every day after lunch. It’s hard to get these guys out here to practice every day, but we work hard. There’s a drill meet every month, so we have to keep sharp,” said Justen, who has been accepted to the University of Mississippi and Ohio University.

The experience at Best of the Best this weekend will be very valuable for the young men, said Hunt.

“Particularly when you look at the size of our school, compared to these 3A and 4A schools all over the region, it’s really an honor. This is the first year that we’ve been able to do it, and we’ve got some kids in here that are exceptional drillers. I think they very much look forward to the opportunity to show what they can do,” Hunt said.

For Colby Gorog, a senior from Virginia Beach who has been nominated to West Point and Annapolis, it will be his final opportunity to represent Fishburne in drill.

View all posts by NewsDesk