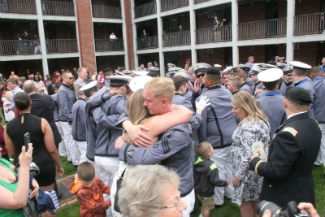 Fishburne Military School’s 138th Session came to an end on Saturday and white hats flew into the sky following the Class of 2018’s Final Formation.

The commencement ceremony was held in Waynesboro’s First Presbyterian Church with a standing room only crowd in attendance. The FMS Class of 2018 (representing 6 US states, and 2 foreign nations) listened intently and struggled to contain their excitement as the moments of their high school careers ticked away.

BG William W. Alexander (VA), a 1964 graduate of FMS and former Superintendent of Fishburne Military School and currently a member of the school’s Board of Trustees, welcomed all in attendance on behalf of the Board. Alexander stressed the the senior class that they were joining the ranks of “graduates of Fishburne Military School, who have for generations before you gone on to great achievements in almost every field of endeavor. As Alumni, our charter is simple: to keep this school open so that it may provide the same opportunities for young men as were provided to you.”

The Salutatorioan, Phillip Stone Grifffin, III (Charlottesville, VA), for the Class of 2018 was recognized and then the FMS Valedictorian for 2018, Connor Green (Virginia Beach, VA) was introduced and delivered a brief address. Green recounted the journey of his cadetship and urged his classmates and underclassmen “do not be average. Leave your mark.”

Mr John Noonan (FMS Class of 1999) then delivered the Graduation Address. Noonan is currently senior counsel for military and denfense affairs to Senator Tom Cotton (R-Ark). He is the former national security advisor to Gavernor Jeb Bush and defense policy advisor to Mitt Romney. Noonan spent several years as a Professional Staff member on the House Committee on Armed Services. He is a former Policy Director of the Foreigh Policy Initiative and spent several yeas as a contrbutor to The Weekly Standard. Mr. Noonan has been featured in National Review, FOX News, Politico, and The Washington Post.

In his address to the Corps, Noonan outlined some of tha challenges of being a man in the modern world. “This country needs men, so be one. Be a man of virtue, be a man of “chest”, as C.S. Lewis had it, …  Be men. Be good men.”

At the conclusion of the ceremony, the Corps of Cadets, along with family, friends, faculty, staff and well wishers filled Yount Barracks for the Final Formation of the year. The FMS Flags were cased for the session and TAPS was played as the Corps stood saluting. Finally, the last orders of the day were read out by the Battalion Commander: “Having completed all military training and academic requirements, the Fishburne Military School Corps of Cadets for 2017-2018 is hereby DISMISSED.”

As the seniors’ hats flew into the sky, the Corps of Cadets and attending families collapsed in on them with handshakes, hugs, and tears.