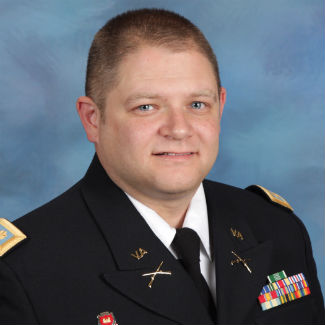 Fishburne Military School Headmaster Major Bryan Greene has been honored for his support of employees serving in the Guard and Reserve.

“The Patriot Award was created by ESGR to publicly recognize individuals who provide outstanding patriotic support and cooperation to their employees, who, like the citizen warriors before them, have answered their nation’s call to serve,” said Emerson. “Supportive supervisors are critical to maintaining the strength and readiness of the nation’s Guard and Reserve units.”

“I am honored to be awarded the Patriot Award,” said Greene, a former North Carolina Guardsman.

In the letter of nomination, Lacey stated, “Major (VA) Bryan Greene, a former NC National Guardsman and OIF veteran, has been unquestionably supportive of two reservist faculty members here at Fishburne Military School. I am a Virginia Guardsman who has had to miss Summer Sessions and class days due to training and emergency duty. The other faculty member is a Naval Reserve enlisted sailor, who, likewise, has had to be absent for training.”

Lacey is a member of Headquarters Company, 116th Infantry Brigade Combat Team, based in Staunton.

Greene is a native of Rockingham, N.C., and served as a combat engineer in the US Army and NC National Guard from 2000-2008, deploying as part of Operation Iraqi Freedom from 2003-2005.

Greene is a 2008 graduate of UNC Asheville with a BA in history. He earned a M.Ed. in teaching and learning history from Liberty University in 2016.

Greene joined the FMS faculty in 2010.