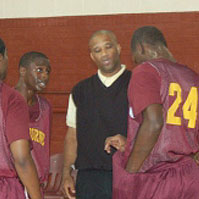 “We want the whole community here. This is going to be high-level basketball. You’re going to be seeing guys that are going to be playing major-college ball. Every player on the floor will be a Division I-level player. How often do you get to see that in a place like Waynesboro?” said Ed Huckaby, the coach of the postgraduate basketball team at Fishburne, which is hosting the four-team FMS Military Challenge on Friday and Saturday.

The competition – FMS, Fork Union, Massanutten and St. John’s Northwestern – promises to be stiff. The rosters of the four are lined with recruits headed to the ACC, Big East, Conference USA and all manner of mid-majors.

“We tell our players that this a chance for them to prove themselves against other great players. We know that the event will always draw college coaches, and the game film has tremendous creditability with coaches because of the level of competition,” said Tyler Benson, the associate head coach at St. John’s Northwestern, which like Fork Union will get matched up with FMS and MMA this weekend.

Rivals MMA and FMS will have to admire each other from afar since they won’t match up this weekend. Huckaby would clearly love another shot at Massanutten, which owns two wins over the Caissons in the 2011-2012 season, including a 101-95 victory at Fishburne in December.

“Massanutten is good, but they don’t have the talent level that we have. We’ve lost to them, and that’s my fault. I didn’t have us as prepared as we needed to be. We’re going to be prepared this weekend,” said Huckaby, whose team has a 15-5 record in 2011-2012.

MMA comes in with an 17-4 record this season, and in addition to the two wins over Fishburne, it has a narrow 86-83 loss to Hargrave Military Academy on Jan. 21 on its ledger.

Massanutten’s top recruit is 6’3″ guard Corban Collins, who is technically a senior and plans to stay at MMA for a postgrad year, meaning he will be a Class of 2013 recruit. Collins had 37 points in the December win at FMS with UVa. coach Tony Bennett in attendance on the front row.

MMA head coach Chad Myers expects to see a few college coaches in Waynesboro this weekend to see the likes of Collins and other talents in the Military Classic.

“It’s easy for college coaches to be able to come watch four teams in one day. And obviously the more coaches that are in the stands, the better off you are,” Myers said.

Huckaby is selling his kids on the idea that they need to impress the coaches watching live and on tape later on with their ability to play defense.

“I tell our guys, Hey, look, we’re not an up-and-down-the-floor team. We’re a grind-it-out team. We need to play that way to win. You can’t take any plays off. And you look at what’s successful in college. Florida State, UVa. … they’re out there playing hard for 40 minutes. And that’s what these coaches expect. That’s what I’m emphasizing right now,” Huckaby said.