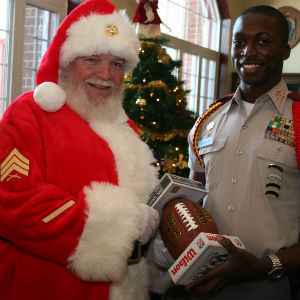 The Corps of Cadets at Fishburne Military School assigned itself a special holiday mission: collecting Christmas toys for needy kids.

“I haven’t seen this many toys in the years that I’ve been here. Our cadets really did their part,” said Brian Draper, a senior from Washington, D.C., who is battalion commander for the Corps in the 2015-2016 school year.

Cadets at Fishburne collected enough toys to provide gifts for 20 needy children, according to Ernest Fishback of the Stonewall Detachment of the Marine Corps League, which will distribute the toys to families in the local area through its Toys for Tots program.

Fishback, aka Sgt. Santa, is the commandant of the local Marine Corps League detachment, which will provide Christmas gifts to 2,123 local families this year.

To Draper, who is working toward an appointment at the Naval Academy or West Point, the Corps’ participation in the Toys for Tots drive is special because cadets aren’t themselves that far removed from the joy of Christmas morning.

“It feels great knowing that you can be a part of helping 20 children have a good Christmas,” Draper said.