First-game jitters? Not for UVA, which is itching to finally get on the field in 2020 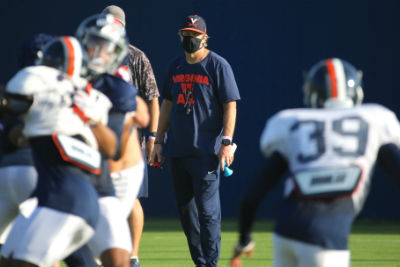 Week 1 in a normal college football season is going to come with mistakes: penalties, turnovers, the concession stand running out of popcorn early in the third quarter.

The 2020 season opener for Virginia, at home on Saturday against Duke, comes at the end of a six-month stretch that has been anything but normal.

“I can say what I am hopeful to see. I hope they play with passion and enjoyment, and enthusiasm and energy, in a celebratory manner just to play the game. I hope that mindset comes through. I hope that comes through in their body language and their effort and their interactions with one another,” UVA coach Bronco Mendenhall said on Monday.

The ‘Hoos are six-point favorites in the matchup with the Blue Devils (0-2), who have the advantage of having already played two games.

Virginia, on its side, has had two season openers scuttled – the planned Sept. 11 tilt at home against VMI, last week’s scheduled ACC opener with in-state rival Virginia Tech.

This after an offseason that saw spring practice shut down before the first wind sprint and a summer training camp that stretched on for 12 long weeks.

“The way I’m looking at it is, it’s Monday, and it’s game week, and so, I’m just trying to keep that as normal and as simple as possible. And, I mean, I’m just really excited to kind of get out there and finally play a game, and not just practice,” senior linebacker Charles Snowden said.

Classmate Terrell Jana, the team’s leading returning wideout, is a see the glass half-full sort in that respect.

“It’s difficult playing for what was the spring ball, fall camp, and a couple bye weeks now. But the benefit was, we didn’t get spring ball, so I’m not worried about, like, we missed the whole five weeks of practice that we would have gotten normally,” said Jana, who praised the approach taken by Mendenhall and the staff to adjust on the fly in the spring and then through the scheduling issues of the past couple of weeks.

He admits, though, that the news about the postponement of the Tech game, which will now be played in December, hit like a bomb.

“Tech was definitely the most real. It was a week away. Just making Tech our season opener, we were all kind of mentally ready to go. So that one was it was a little bit of a bummer, a little draining,” Jana said.

“That game, unfortunately, being canceled, going into this one, Coach Mendenhall had a good approach of allowing some time off for the guys to kind of get ready for Duke. Going into this week, I think we have a good approach again, and again, it’s just trying to maximize our performance, our mental, emotional and physical performance come Saturday,” Jana said.

So, it sounds like, from listening to Jana and Snowden, Mendenhall has nothing to worry about from the passion and enjoyment and energy and enthusiasm perspective.

“I’m certainly expecting some mistakes. It always happens in Game 1,” said Mendenhall, who, you are reminded reading those words, is a football coach, and the profession teaches you to expect bad things to happen.

“I don’t know where they’re going to come from,” Mendenhall said. “There will probably be more penalties than what I would like, there might be special teams things that maybe there’s been a blind spot here or there. There might be a matchup that’s more in our favor or Duke’s that I haven’t counted on.”

At least Mendenhall is able to think through schematics. He acknowledged last month that his focus for much of training camp was on being basically the chief health officer of the program, making sure the team was following social distancing protocols, leaving the coaching to his assistants.

After 12 weeks of that kind of walkup, Saturday should be, dare the word be said out loud, written, even passing through the mind as a thought, fun.

“It’s all the uncertainty of any normal year, the first game of the season, in addition now to all the other protocol challenges we’ve had, which I just hope is reflected in in the enthusiasm to actually play football and to acknowledge and have fun,” Mendenhall said.

“I don’t know even how much that word is used in college football now, to have fun, you know. It seems like it’s totally outcome driven, and rankings oriented and statistically emphasized. I hope that we play well. We play clean, we play effectively. I really would like to see our players just enjoy playing football. It’s been a long time.”

For Snowden, it is fun just thinking about football for a change.

“For me, it’s 100 percent normal game week. I’m just really focused on Duke right now, and how I can best perform and how this team can best perform,” Snowden said. “And so, yes, it’s abnormal, obviously. But now, in terms of being able to play a game after practicing for nine weeks, I mean, I don’t think I’m going to need any help amping myself up.”

“It’ll kind of be like a normal first game for us. I mean, it’s obviously, turnovers are a big thing. Tackling is very important as well. And so those two things really are what we’re trying to focus in on. And it’ll be different, because they’ve already had two games under their belt, where we haven’t had any, and so hopefully, we’re going to try to mitigate those first-game mistakes,” Snowden said.

Jana sounds like he can taste it – that it’s almost here.

“I was always getting ready to get again into game mode,” Jana said. “The closest we got was seven days away. Tech was the closest we got to a game. I’ve always kind of been even-keeled kind of preparing. Duke has had two games ready, so it’s almost, you know, a little more security, you think with the game. Because before that, we had, I don’t know, three, three games that got canceled. This one seems a little more real, I guess.”