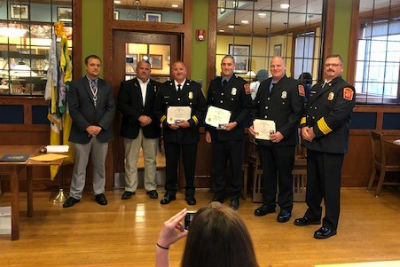 Capt. Curtis Chandler and firefighters Eric Higgs and Matthew McCray were honored for their work saving the lives of several people from carbon monoxide poisoning. Photo courtesy City of Harrisonburg.

A team of Harrisonburg firefighters who rescued a family from carbon monoxide poisoning earlier this year, and a battalion chief who has dedicated his career to saving lives through the prevention of fires, were recently recognized for their efforts to protect the community.

The Fort Harrison Chapter of the Sons of the American Revolution held its annual awards ceremony for public safety officers to confer awards and thank local first responders on Tuesday.

On May 26, the team of firefighters staffing Engine 23 responded for a medical emergency in the 1700 block of Buttonwood Court. Upon arrival, the crew found two people unconscious inside a residence and rescued a total of six people, including several young children, from a home that was filled with deadly carbon monoxide. 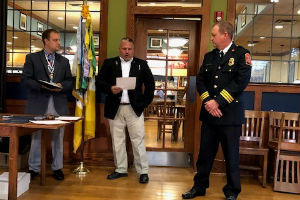 Battalion Chief/Deputy Fire Marshal Mike Armstrong is honored for his years of committment to the local community. Photo courtesy City of Harrisonburg.

Since 2014, Armstrong has served as the city’s deputy fire marshal overseeing the Community Risk Reduction Division within HFD, including all aspects of life and life safety prevention, education, code enforcement, investigations and compliance.

Armstrong has more than 33 years of combined fire and life safety experience, having served his community as a charter member of the Singers Glen Fire Company, a career forest firefighter, and supervisor of wildland and urban interface fuels management.

“We are honored that the SAR has taken the time to recognize our people for their outstanding work,” HFD Fire Chief Matthew Tobia, who also attended the event, said.

“Although no recognition is ever sought by public servants, it is nonetheless deeply appreciated. We take pride in upholding the finest traditions of our department in protecting our community.”