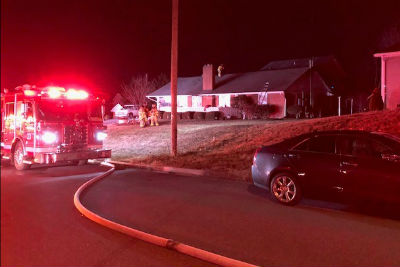 An early morning fire sent a family of seven into the cold on Saturday morning, and the Harrisonburg Fire Department is reminding local residents once again of the importance of having working smoke alarms.

Harrisonburg firefighters were called to the 500 block of Allegheny Avenue at 5:30 a.m. for a reported structure fire with flames coming from the roof. First arriving units confirmed an active fire in the residence, which has been determined to have originated from the chimney.

The home’s occupants were able to escape after their pet initially alerted them to a problem and a neighbor banged on their door after he saw fire in the attic.

The home did not have working smoke alarms, and the quick actions of a neighbor helped avert a tragedy.

In the wake of the fire, the Harrisonburg Fire Department has several important messages for the community.

First, functioning smoke alarms are critical in alerting occupants and giving them the time necessary to escape.

Second, chimney fires are a frequent source of fire in the home, causing 25,000 fires annually resulting in $125 million in property damage.

To prevent chimney fires, occupants should:

Firefighters were able to bring the fire under control in about 30 minutes. The cause of the fire has been determined to be accidental, originating as a chimney fire, with damage estimates set at approximately $60,000.

There were no civilian or firefighter injuries despite operating in temperatures that hovered in the teens.