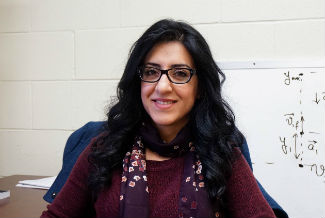 For more than a decade, scientists have accepted that cholesterol – a key component of cell membranes – did not uniformly affect membranes of different types. But a new study led by Assistant Professor Rana Ashkar of the Virginia Tech Department of Physics finds that cholesterol actually does adhere to biophysical principles.

The findings, published recently in the Proceedings of the National Academy of Sciences, have far-reaching implications in the general understanding of disease, the design of drug delivery methods, and many other biological applications that require specific assumptions about the role of cholesterol in cell membranes.

“Cholesterol is known to promote tighter molecular packing in cell membranes, but reports about how it stiffens membranes have been so conflicting,” said Ashkar, who is a faculty member in the Virginia Tech College of Science. “In this work, we show that, at the nanoscale level, cholesterol indeed causes membrane stiffening, as predicted by physical laws. These findings affect our understanding of the biological function of cholesterol and its role in health and disease.”

According to the study, cell membranes are thin layers of fatty molecules that define cell boundaries and regulate various biological functions, including how viruses spread and how cells divide. To enable such functions, membranes should be able to bend and permit shape changes. This bending propensity is determined by how packed the molecular building blocks are; tighter packing results in stiffer membranes that cannot bend so easily, Ashkar added.

Cholesterol’s impact on cell membranes at the molecular level

Cholesterol is found in high quantities in bacon, egg, cheese, and many other comfort foods. While too much cholesterol can harm the body, regulated amounts of cholesterol in cell membranes are absolutely necessary for the normal function of cells. Anomalies in cholesterol amounts are often associated with various disease conditions.

Besides cholesterol, our cell membranes are primarily formed of lipids, which are small, fatty molecules that self-assemble into bilayer structures when present in water – and nearly 60 percent of the human body is made of water. Together, lipids and cholesterol form the barriers that define our cells and regulate the cellular exchange of nutrients.

At the molecular level, cholesterol possesses a slick and rigid structure. When it interacts with our cell membranes, it jams itself right in between lipids, which results in a more densely packed membrane. According to structure-property relations, this would naturally result in a stiffer membrane.

Yet, for the past 10 or so years, physicists and biologists have assumed that cholesterol had nearly no effect on the stiffness of membranes formed of cis-unsaturated lipids, a common type of lipid found in our cells, despite its well-documented effect on lipid packing.

“It defied our understanding of what cholesterol does to cell membranes,” Ashkar said. “It also contradicts standard structure-property relationships in self-assembled materials.”

These perceptions are important because in ideal circumstances, cell membranes should maintain a semi-rigid structure: rigid enough to keep its form, but flexible enough to allow for the dynamic movement of signaling proteins and functional domains. Misconceptions about how cholesterol stiffens cell membranes impact our understanding of membrane function.

The data initially made little sense, but as she probed deeper, Ashkar found a clear case of how soft materials can “apparently” exhibit different properties, depending on the parameters of the observation method. She found that over short length and time scales over which important signaling events occur — we’re talking nanometers and nanoseconds — the added cholesterol induces membrane stiffening that one would expect.

To contradict an established doctrine in science requires more than just one set of data points. “We found these results a while back, but they were met with skepticism because they’re so against the existing notions,” Ashkar said.

Ashkar’s first tests used neutron spin-echo spectroscopy, a unique probe that enables the study of materials on the nanoscale. These experiments were performed at the two major neutron scattering facilities in the United States, the NIST Center for Neutron Research and the Spallation Neutron Source at Oak Ridge National Laboratory.

Ashkar bolstered her evidence with computer modeling simulations, in collaboration with George Khelashvilli, an assistant professor at the Weill Cornell Medicine Department of Physiology & Biophysics, and further validated the experimental findings with recent nuclear magnetic resonance measurements, in collaboration with Michael Brown, a professor of chemistry and biochemistry at the University of Arizona. The data consistency in all three methods provided thorough evidence for Ashkar’s hypothesis and confirmed standard structure-property relations in lipid membranes.

“These results call for a reassessment of existing constructs of how cholesterol affects lipid membranes,” Ashkar said. “If we don’t have the right assumptions, we cannot make the right predictions, and we will not have the right design for the treatment of viruses, diseases, or other biological anomalies.”