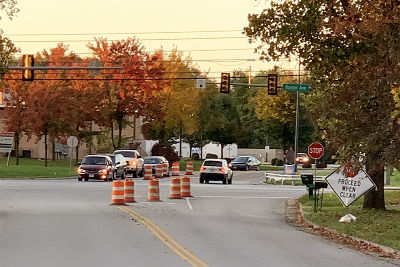 The intersection of Rosser Avenue and Tiffany Drive in Waynesboro. Photo by Crystal Abbe Graham.

WAYNESBORO — Drivers traveling through the intersection of Rosser Avenue and Tiffany Drive have noticed some changes since July 29.

Left-hand turns from Tiffany Drive onto Rosser Avenue are prohibited and drivers going toward downtown Waynesboro no longer have to wait for a green light.

“So, a car ran into that pole with enough force that [the pole] had to be taken down,” said Jim Shaw, deputy city manager of Waynesboro, of the pole on Rosser Avenue near the Brandon Ladd Apartments.

Shaw said that the pole holding up the lights on the side of Rosser Avenue going toward downtown Waynesboro “were damaged beyond repair.”

The Waynesboro driver of the car that hit the pole, according to Waynesboro Police Department’s Sgt. Fred Smith, sustained minor injuries and was charged with failure to yield the right of way. The pole was struck after a collision between other vehicles in the intersection.

The River City expects a new pole and support beam to arrive in time for installation “as early as next week,” according to Shaw.

The cost of surveying the intersection and installing a new pole and support beam with lights will cost the city $60,000. For now, Shaw said, the city’s insurance company will pick up the tab with the hope that the driver will later pay back the insurance company.

Shaw added that the new pole will have to be relocated in a different spot than the original pole.

The intersection is one of nine lights between Tiffany Drive and Shenandoah Valley Drive which Shaw said the city is working with the Virginia Department of Transportation to “develop a plan for the Rosser Corridor.”

A large part of the plan would be the timing of the nine intersection lights.

“We want to improve that timing system,” Shaw said.

He said a couple of the lights are controlled by VDOT but the rest by the city, and improvements made would be for safety.

The city has applied for VDOT Smart Scale grants from which funding could be received within the next year.