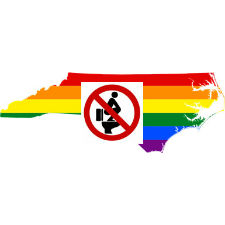 There appears to be major sewage malfunctions in North Carolina.  Initially, I thought it was going to be a costly infrastructure burden on the state.  On closer review, I discovered it was indeed a sewage problem – spewing from the mouths of the ignorant.

They are commonly known as the “bathroom” bills.  In North Carolina last week, the state “passed a law blocking local governments from passing anti-discrimination rules to grant protections to gay and transgender people.”  What?  Yes.  A few states are focusing their energies on monitoring the bathroom use of the LGBT community.

The absurdity is mind boggling.  I thought the Supreme Court ruled in Obergefell v. Hodges (same sex marriage).  I thought finally we can be done with attacks on the LGBT community and just consider ourselves human.  One category – human.  Although, there are times I’m not too impressed with the species.

I can’t grasp these laws since they reek of “separate but equal.”  Why is using the bathroom an issue?  It’s only an issue for me if you don’t flush.  I can’t even begin to understand the logistics.  What if I really have to “go” and use the male bathroom?  Is that against the law?  What if I announce, as I leave, I declare white male as gender identity, will I get paid more?  Who checks who’s using the bathroom and how?  Is there a bathroom monitor?   If so, are you asked your gender identity, is it assumed, do they look, or are you issued a card?  I was thinking like a credit card complete with “protective” chip.  Or maybe something more permanent.  Then, I thought this reminded me of something but I just couldn’t place it.  Oh yes!  Tattoos on the forearm!  There it is!  It’s like living in Nazi Germany.

North Carolina isn’t alone.  The same in Georgia, Tennessee, and Arkansas.  It would appear these states have no other pressing issues.  I was curious so I checked the rankings of North Carolina and Georgia for education and poverty.  You know, the minor issues.  North Carolina, depending on the source, ranks 34th to 47th out of 50 states, including the District of Columbia, in education.  Over 25 per cent of the populace lives in poverty.  Georgia has the highest high school dropout rate in the country.  They tied with North Carolina in percentage of population living in poverty.  I could be wrong, but I would think those issues take precedence over who’s using the bathroom.

Of all the things to defend the LGBT community, it may be the almighty American dollar.  From CNN Money, on March 26, “The NBA said the law could cost Charlotte the right to host the 2017 NBA All-Star game.”  Additionally, “multiple corporate names are also denouncing the law.”

The same goes for Georgia. “The measure has been met by outcries from major players in the business, tech, and entertainment industries.”  Disney, yes Disney (you can’t get much more American than Disney) said it would stop filming.  Well, you can get more American than Disney since the NFL (football as only Americans know it) had input as well.  “The NFL said the bill could cost Atlanta the opportunity to host the Super Bowl.”

I can’t win on this one.  I lean toward the left but it will take the economic power of the right to pull its strings.  Unbelievable.  As always, the golden rule applies.  The one with the most gold makes the rules.  In this case, a good thing.  But really?  I have to rely on the power of the right?  All I can do is write about the injustice.

I certainly don’t have the financial influence as Disney or the NFL.  But, I can take a drive to North Carolina, visit the governor, take a huge dump in one of his mansion’s toilets (the mansion is a quaint little place), use a whole roll of toilet paper, not flush, not wash my hands, and then shake his hand.  It’s a challenge staying apathetic with ridiculous laws like “bathroom bills” being passed.  Since I don’t have the finances to pressure government, I’ll just pass along my vile and vulgar thoughts.