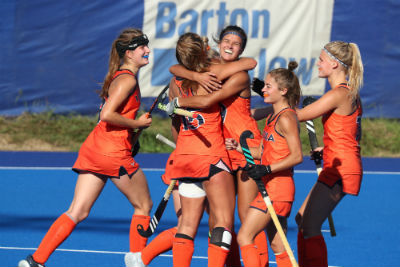 UVA opened a weekend homestand with a 1-0 win over Syracue on Friday at Turf Field.

The Cavaliers had two excellent scoring chances in the first quarter. Freshman striker Lilly Hengerer took an on-target shot at an open goal 4:02 into the contest, but Syracuse defender SJ Quigley got a stick on the ball and saved the shot.

Three minutes later, Meghen Hengerer also had a great angle for a shot that was knocked down right in front of the goal line by the Orange’s Syd Taylor.

Freshman striker Anneloes Knol had a shot go into the net after a penalty corner with 6:41 remaining in the second quarter, but the goal was whistled off after review.

Syracuse (0-1, 0-1 ACC) had their best scoring opportunity in the waning minutes of the first half, taking four shots after a penalty corner, but the first effort was blocked, with Henriksen making a pair of saves before a fourth attempt sailed high.

With the scored tied 0-0 and the clock showing less than two minutes left in regulation, Janssen received a pass up ahead and dribbled her way into the circle, drawing a foul to earn a penalty corner for the Cavaliers. Janssen then deflected in a shot from junior back Amber Ezechiels (Niew-Vennep, Netherlands) off the stick stop at the top of the circle to break the tie.

“There was a lot of back-and-forth action, big counter attacks with their big balls. I thought we got good pressure on in the first half. We were able to put pressure on and intercept a bunch. That’s where we had those scoring opportunities. And then they responded with some really big balls for midfield that we weren’t able to stop and that allowed them to have few attacks, and a lot of space,” UVA coach Michele Madison said.

“Our defense right now, they’re playing as a unit. They just know each other so well instinctively and just cover for each other and very composed in their tackles.”