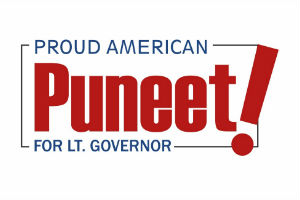 Puneet Ahluwalia announced Wednesday that he is a candidate for the Republican nomination for lieutenant governor of Virginia.

“Who would have thought eight months ago Virginia would face a global pandemic, an economic meltdown, statewide protests, schools closed indefinitely, a crackdown on our 2nd Amendment rights, and an assault on our freedom and our culture?” said Ahluwalia, a Fairfax-based consultant to businesses on client acquisition, marketing, and strategic affairs.

“I’m running for lieutenant governor because Virginia is in trouble right now, and we’re running out of time as the Democrats offer the same old tired promises,” Ahluwalia said.  “We have to reopen our economy, we have to do it safely, and protect the most vulnerable among us; but workers need to work, students need to learn, and families need to thrive again.  As a business leader, I know what makes our economy tick and how to get it moving again without putting people in undue risk.”

Ahluwalia is originally from India. His wife, Nadia, is from Pakistan and owns an IT services firm supporting companies and government agencies.

They became citizens of the United States 14 years ago.

“As immigrants ourselves, my wife and I weren’t born as Americans, we chose to become Americans, and for good reason. This is the greatest country in the history of the world. But we can’t take our prosperity, or our freedom, for granted. We must work every day to protect and preserve the unity and the values so many of our fellow Americans have sacrificed and bled to preserve,” Ahluwalia said.

“As a person of color, I sympathize with those who are frustrated and angry about race in this country, but not for the same reasons as radical politicians,” Ahluwalia said. “The far left is using race today in the same way progressives have used it for the last six decades, as a means to gain and retain power. They make big promises, trap minorities in dependence and hopelessness, then expect we’ll keep voting to re-elect them.

“Progressive Democrats who run most of our largest cities and counties, have trapped our poor in communities that discourage job growth, deter small business start-ups, and restrict children to failing schools. They have created a dependency on government handouts instead of a hand up in a rigged system against economic mobility. Democrats continue policies that ensnare generation after generation of minorities that believe there is no hope. No wonder people are frustrated and angry.”

“I promise to bring a message of hope, growth, and opportunity to every person, every family, and every community in Virginia. We can build a strong economy, create more high paying jobs, provide school choice for families in failing school districts, plus increase access to high quality healthcare while holding the line on costs. The Commonwealth must be more responsive to the needs of our people, especially our poor. However, we can’t do it by the same old failed policies of the left. Throughout this campaign, I will be presenting new ideas. It is time for a new pathway to prosperity.”