Experienced O line will be building block for UVA Football 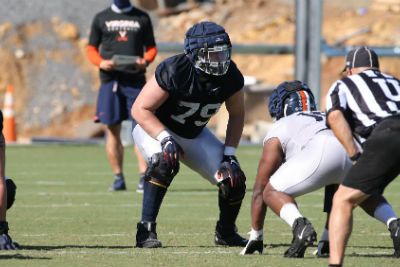 Dillon Reinkensmeyer started 11 games as a freshman offensive lineman at UVA in 2017, but he acknowledges now that it was more a matter of necessity than an indication of his early progress as a player.

“When we first came in, it was tough, it was really tough sledding for a while. I can say I would have definitely not played early on this offensive line. I would have definitely sat for a little while on this offensive line,” said Reinkensmeyer, a 6’6”, 300-pounder who has an otherworldly 37 career starts on his resume coming into his senior season in 2020.

The unit across the board at UVA is now among the more experienced in Power 5 football. Virginia returns all five offensive line starters from the 2019 Orange Bowl, and the line’s 115 career starts leads the ACC.

The competition for playing time will make everybody better.

“Competition, man. What’s that commercial? Like, when banks compete, you win. When O linemen compete, I win,” Tujague said.

The line has been a weak spot as coach Bronco Mendenhall and his staff have tried to build from the ground up since arriving in Charlottesville in 2016. That’s a big reason why guys like Reinkensmeyer were able to get time early, basically because there wasn’t much left behind from the regime of Mike London in terms of experience and productivity.

The issue has been most noticeable when you look at the team’s numbers on the ground. UVA has not been better than 10th in the ACC in rushing offense in the Mendenhall era, ranking 14th (dead last) twice, and 13th in 2019 as the team made its first ACC Championship Game appearance.

“Running the ball is a lot easier than playing catch,” Tujague said. “If those are the tools, that’s what you can do, then that’s what we’re going to do. There’s always an emphasis on running the football. The effectiveness of it, that comes with time and strength. And the numbers that we’ve gained in the weight room through Gris (strength and conditioning coach Shawn Griswold) and his staff are obviously going to contribute to the success of any run game.”

Griswold, like other strength and conditioning coaches across the country, had to get creative to keep his guys on track through a spring and summer of quarantine, devising workouts for UVA players based on what they had available to them as they sheltered in place without access to gyms.

Oluwatimi was impressed when he arrived on Grounds last month at how well his O line-mates took to the unusual circumstances.

“We all came back from quarantine bigger, stronger, and ready to lead the team,” Oluwatimi said.

The emphasis in the run game was evident from practice on Tuesday, which featured a script of 80 offensive plays, 60 of which were runs.

The focus on the ground is out of necessity with the dynamic Bryce Perkins now in training camp with the NFL’s Los Angeles Rams.

Perkins produced 1,692 yards and 20 touchdowns on the ground the past two years, and his 769 yards in 2019 was nearly 300 yards better than Virginia’s most productive tailback (Wayne Taulapapa: 467 yards).

The battle to replace Perkins at QB features a pair of mobile guys – Brennan Armstrong and grad transfer Keytaon Thompson.

You don’t necessarily change what you do, change your identity, but it would be nice to be able to get more production out of the tailbacks, and the key to being able to do that is the line.

“I think there’s a lot of potential for growth right now,” Reinkensmeyer said. “Definitely returning a lot of people with starting experiences is huge. I think this is the first time we’ve had, like, a really cohesive line and like consistent line since we’ve been here, so I definitely think we have to take advantage of that.”

“We’re trending in the right direction,” Oluwatimi said. “They’re going on their fifth season here, and the O line has been one of the weakest links on the team, but this year, we made it an effort to you know, not be that. We don’t want to put a big stress on offensive coordinator, Coach TJ, the quarterbacks coach, all of them, you know, trying to do more to pick up the slack this year.”