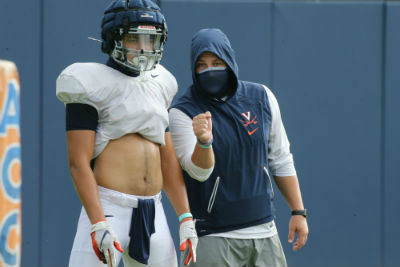 As the Bronco Mendenhall era enters Year 5, the pieces to the puzzle that the UVA coach wants from his defense are starting to fall into place.

“These are the guys we’ve recruited, these are the guys we’ve brought in, and we’ve been able to develop them and kind of build them into this defense that we want. And so I would say that this year, we’re probably the deepest we’ve ever been,” said inside linebackers coach Shane Hunter, who followed Mendenhall from Charlottesville, after playing and coaching for Mendenhall at BYU.

Which is to say, Hunter is well-versed in what Mendenhall wants from his defense – speed, pressure from all angles, versatility.

“If you look at our linebackers over the last four years here, a lot of the guys that are inside, they’ve been outside linebackers for us at one point, and some of the guys that are outside, they’ve been inside guys. And so, there’s so much that goes on both ways,” said Hunter, explaining how that benefits UVA’s multiples approach to pressuring the QB, dropping different guys into coverage and stuffing the run.

Senior middle linebacker Zane Zandier seems like the kind of guy who could be coaching himself when his playing days come to an end.

By his junior season in 2019, Zandier was the linchpin of the ‘Hoos D, leading Virginia with 108 tackles, recording five sacks, ranking third on the squad with five passes defensed, and contributing a pivotal picksix that helped turn around an early 17-0 deficit into a comeback 27-17 win over ODU in September.

Now one of the old men in the defensive room, Zandier points to the experience surrounding him – fellow seniors Mandy Alonso, Joey Blount, Nick Grant, Brenton Nelson, Charles Snowden are among the 17 players who started at least one game on defense in 2019.

“In each position group, we have guys returning that have played for two, three years, they know the defense really well, and I think we’re able to help the young guys with that, you know, to move along a lot faster than years prior,” Zandier said. “We’re taking more of a leadership role with the players than coaches telling us, you know, what to do, how to do it. It’s kind of been on us to set the standard and show the young guys, and the guys, you know, behind us, underneath us, the way we do things, how we do things. I’m feeling really confident. I think we’ve got a lot of talent. Our mindset has been really good with everything going on. I’m excited. I think our defense is looking really good.”

One of the young guys competing for playing time is Nick Jackson, a 6’1”, 235-pound sophomore who was pressed into action at inside linebacker as senior stalwart Jordan Mack battled through injuries late in the 2019 season.

Jackson was one of 17 true freshmen to play for the ‘Hoos in 2019, and though the game might have been a bit too fast for him at the outset, he grew into his role as the baptism by fire played out, getting nine tackles in the ACC Championship Game loss to Clemson after replacing a hobbling Mack early in that one, then getting the start in the Orange Bowl and recording four tackles in that loss to Florida.

The experience of having to not just play, but play a crucial role, down the stretch in 2019 is paying dividends for Jackson as he prepares for 2020.

“I think that was crucial. Just me learning where I’m at, I think that was an experience, just being thrown into the fire. I mean, Bryce Hall once told us, like, you can’t be fireproof until you’ve been fire-tested. And I think just throwing me into the fire, I learned a lot last year, and I had to come back and get a lot stronger and get ready for this season,” Jackson said.

Zandier has seen it from his young teammate in camp.

“He’s going to have a really big year,” Zandier said of Jackson. “Really smart kid, knows the defense well. For his age. I’ll just say, his maturity and, you know, making checks, understanding the defense, seeing it unfold in front of him, seeing things happen slowly, I think he does a really nice job. He’s stepped into that role. I think he’s been doing really well in playing the buck position. I’m really excited to see his transformation from last year to this year after kind of being thrown to the wolves when Jordan went down, but he did well last year, and I think we’re going to see him do a whole lot better this year, so I’m really excited to watch him.”