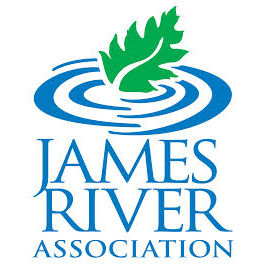 James River Association, partners and community members in Richmond will celebrate World Fish Migration Day –  a one day global-local event to create awareness on the importance of open rivers and migratory fish.

Rivers around the world, like the James River, provide many services: water supply, irrigation, navigation, hydropower, fishing and more. However, these activities are often carried out at an environmental cost. Dams and other human activities can cause river fragmentation, water quality deterioration, and loss of habitat that collectively has led to decline in fish stocks.

In 1609 Captain John Smith wrote of the Jamestowne Colony, “We had more sturgeon than could be devoured by dog and man.” The Bay’s largest and oldest fish was abundant in the waters of the James during European colonization, but by the dawn of the 20th century the sturgeon population had nearly collapsed due to overharvest, loss of habitat, and pollution. American shad once migrated to the James River in staggering abundance each spring. Despite the treasured cultural symbol shad represent in Virginia, American shad too have suffered from habitat loss, overharvest and construction of migratory barriers in the river like dams and culverts.

The James River is still home to many species of migratory fish that complete incredible journeys related to their spawning runs. Spending part of their lives in the ocean and part in freshwater rivers, these fish not only require healthy waters and habitat, but also open rivers where they may freely migrate. Thanks to long efforts by many organizations and agencies, the James River is showing signs of some improvement in water quality, and species like sturgeon are returning to spawn in greater numbers.

About: Join RVA World Fish Migration Day’s main event! At the festival, visitors will learn firsthand about the species that migrate through the James River and the efforts taken to help support fish passage. Bosher’s Dam is equipped with a fishway structure, designed to allow migratory fish species to freely move upstream and downstream of the dam during their spawning season. Guided tours will be offered every hour starting at 10:30am, led by the VA Department of Game and Inland Fisheries (DGIF) staff who maintain and monitor the fishway. Live fish collections by DGIF throughout the day will allow visitors to see the fish before being released back into the river. Organizations and agencies working to conserve migratory fish species will feature booths and information on local activities to improve water quality and make fish migration possible.

This event is suitable for all ages and will occur rain or shine. A short walk is required from the parking area to the fishway so please plan for this “migration” accordingly. The first 50 attendees will receive a Fishes of Virginia poster.

About: Paint Out Pollution is a project to increase awareness

of stormwater pollution through storm drain art. Volunteers will use stencils of migratory fish species, including the Atlantic sturgeon, Blueback herring, and American eel, and spray paint to install art on storm drains. Celebrate World Fish Migration Day by painting out pollution with the James River Association and Art on Wheels. Learn more and let us know if you’re interested in volunteering here: jrava.org/what-you-can-do/paint-out-pollution/

About: Dams across the world have blocked fish migration for centurie s. This powerful film odyssey across America explores the sea change in our national attitude from pride in big dams as engineering wonders to the growing awareness that our own future is bound to the life and health of our rivers. Where obsolete dams come down, rivers bound back to life, giving salmon and other wild fish the right of return to primeval spawning grounds, after decades without access. DamNation’s majestic cinematography and unexpected discoveries move through rivers and landscapes altered by dams, but also through a metamorphosis in values, from conquest of the natural world to knowing ourselves as part of nature. The DamNation film trailer is available at: damnationfilm.com/trailer. A special thanks to Aviva Rental Systems for providing professional audio/visual equipment for the event.