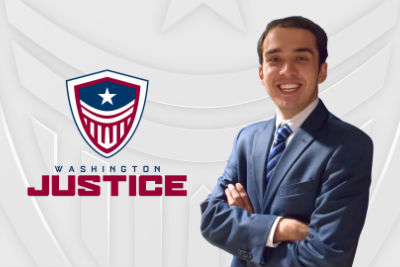 Shenandoah University is adding a new name to its esports roster: Grant Paranjape.

Paranjape is the Vice President of Esports Business for the Washington Justice, a professional Overwatch esports team based in Washington, D.C. In the fall, he will become an adjunct professor in Shenandoah’s School of Business, where he will teach an upper-level esports consumerism class as part of the undergraduate and MBA esports programs.

“I’m incredibly honored and excited to be teaching at Shenandoah this fall,” Paranjape said. “Shenandoah has been incredibly progressive and a true first mover in developing a world-class esports major for students. I look forward to participating in the expansion of that program and sharing my knowledge and experiences with the next generation of esports leaders as we explore the business behind esports.”

Shenandoah Esports Director Joey Gawrysiak, Ph.D., and several students in the esports major have connected with Paranjape over the past few years while Paranjape worked with the Wizards District Gaming NBA 2K team. They’ve also volunteered at several events with the Washington Justice. Paranjape currently serves on Shenandoah University’s esports board of advisors, where he provides input on degree programs and assignments for students in esports classes.

“This is such a great opportunity for our esports students to learn from one of the brightest and most well-respected individuals in the esports industry,” Dr. Gawrysiak said. “Grant brings about world-class experience and will challenge our students and reinforce our ideals of project-based and experiential learning as we continue to find ways to prepare students to enter the esports industry beyond gaming.”

In his role with the Washington Justice, Paranjape leads all business and team operations for the franchise and works to expand the organization’s passionate local fanbase across the Washington, D.C., Virginia and Maryland areas.

An avid gamer, Paranjape leveraged his love for video games into a career while earning his Master of Business Administration from Tulane University’s A.B. Freeman School of Business in 2016. Paranjape was able to use his firsthand experience and expertise to consult and advise across multiple esports organizations, including leading esports operations for Monumental Sports & Entertainment before ultimately being selected to run operations for the Washington Justice. The Justice is currently playing in its second season in the Overwatch League and has successfully hosted two sold-out homestands at the popular Anthem located on the waterfront in D.C.

With Paranjape’s arrival, Shenandoah will have two full-time and two adjunct esports professors teaching across the university’s esports offerings, which include bachelor degrees in esports management and media and communications; certificates in esports coaching and esports management; and an MBA concentration and Bachelor of Business Administration in esports management. More than 30 students are expected to be enrolled in the program this fall.

In addition to the students in the major, Shenandoah also has a competitive varsity esports program with more than 40 students competing in League of Legends, Overwatch, Smash Bros., Rocket League and Valorant.