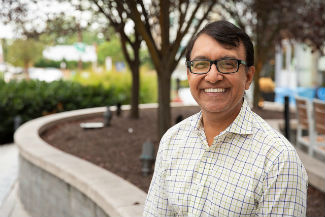 Sanju Bansal has lived in, invested in, and developed the greater Washington, D.C., metro area’s business ecosystem since 1994.

But there was one thing he thought the region was always missing: a booming, entrepreneur-driven tech sector on the scale of those found in Silicon Valley, Boston, and Austin, Texas.

So when Virginia Tech announced plans to train thousands of new graduates in computer science, engineering, and other tech fields, Bansal was elated. That wasn’t just because Virginia Tech’s Innovation Campus proved foundational in attracting Amazon’s new headquarters in the D.C. area, but because he sees the new campus as a major step to expanding a major industry.

“We’ve been missing a crucial ingredient in the business ecosystem,” said Bansal, “and that is a world class computer science program that graduates people who can both enter the workforce and do research. We need people in scale — not just dozens, but hundreds of people per year coming out of an institution makes a difference in the economy. I couldn’t be happier that Virginia Tech has a chance to build this for the region.”

And now, Bansal said, you can see it emerging in Washington, D.C., with Virginia Tech’s Innovation Campus and complementary efforts by its fellow Virginia institution, George Mason University.

Brandy Salmon, managing director of the Innovation Campus, said that Bansal has played an important role in both pushing and encouraging the Virginia Tech team.

“As a successful entrepreneur in the digital tech sector and resident in the greater Washington, D.C,, area, Sanju brings invaluable insights to Virginia Tech,” Salmon said. “Through his own lived experience, Sanju pushes the Virginia Tech team to think big and embrace the role our campus will play to create the country’s premier tech hub. He consistently reminds us not to be satisfied with good, but rather, pursue world-class excellence.”

Bansal is well-positioned to comment on the D.C. area’s business community. He grew up in Fairfax County, Virginia, went to college in Boston, and worked in New York and Delaware before deciding to move back home. At age 24, he cofounded MicroStrategy, an early player in big data storage and analysis. He served as that company’s chief operating officer from 1993 to 2012.

In the years since then, Bansal has continued to participate in a number of different endeavors. He’s invested in about 30 software businesses, sits on the boards of six companies, consults with growing companies, and coaches CEOs.

Although he didn’t attend Virginia Tech as a student, Bansal has always shared a relationship with the university. His father, an engineer, participated in the design of the six-story, 100,000-square-foot curved addition to Carol M. Newman Library that began in 1978 and opened in 1981. Later, his younger brother, Rakesh “Rick” Bansal, graduated Virginia Tech in 1994 with a degree in industrial and systems engineering. Today, Sanju Bansal continues to engage with Virginia Tech, attending at least a couple of home football games each year.

But his interest spiked with Virginia Tech’s announcement of the Innovation Campus, which will bring together hundreds of new graduate students, dozens of new faculty members, and numerous industry partners. As part of its plan to increase undergraduate enrollment to 30,000 students, Virginia Tech also will increase undergraduate enrollment by 2,000 students in computer science, computer engineering, software engineering, and related disciplines at its Blacksburg campus over the next eight years.

“It will elevate the level of talent we’re going to get in computer science,” Bansal said. “That in turn will feed the local economy. Workforce development is a big part of what’s going to make this campus successful. In addition, it’s bringing really high quality, forward thinking people into this economy, which gives us the opportunity to build some great product companies that the D.C. region has not historically had. I hope the Innovation Campus will graduate people who will plant the seeds of the next Microsoft or Google.”

Bansal’s familiarity with the Hokie Nation also informs his understanding of how the university’s land-grant mission and commitment to service, as stated in its motto Ut Prosim (That I May Serve) undergirds this investment in the D.C. region.

“We need the kinds of people the Innovation Campus can produce to serve the country,” Bansal said. “The hopes are high. People are looking for us to step it up with Virginia Tech and elevate graduates in region. The business community is excited about what Virginia Tech is going to bring.”