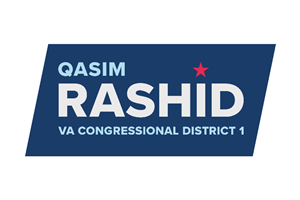 “I’m honored to receive this endorsement,” Rashid said. “The Sierra Club advocates for what every single one of us should: a livable world and a healthy environment for our children. I’m glad to have their support as we continue our fight for working families and a sustainable future.”

Humanity Forward, a non-profit founded by Democratic activist Andrew Yang, is backing Rashid because of his support for universal basic income.

“Qasim Rashid is a human rights lawyer, a devoted father and husband, and most importantly of all, someone who brings people together,” Yang said. “When a Virginia resident, Oz Dillon, tweeted an Islamophobic message to Qasim in February, Qasim responded by donating to help pay off Oz’s medical debt. That act of kindness started a different conversation; they even met up, and Oz planted a Qasim Rashid for Congress sign in his front yard. Qasim is a big thinker on policies and a passionate advocate of Universal Basic Income running in a competitive Virginia district against a six-term Republican incumbent. Let’s go, Qasim!”

“Andrew Yang impacted the lives of so many with his run for president which focused on developing an economy that works for the people,” Rashid said. “He has brought innovation and energy to our political system. I’m proud to accept his endorsement and I look forward to working to put humanity first and make Universal Basic Income a reality.”