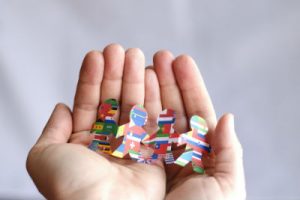 The term “environmental justice” is increasingly joining the common lexicon of activists and community leaders.

The movement addresses massive problems like climate change and racism – but rather than siloing these struggles, looks at their intersections: how social issues and environmental crises play off one another, and how marginalized communities often bear the brunt of environmental degradation.

Or look at the stream restoration work that biology students and faculty conducted in the rural area around Bergton. They were joined in the project by students at EMU’s Center for Justice and Peacebuilding, who interviewed community members about their social climate concerning aquatic ecosystems and water quality.

Take, for example, work that Eastern Mennonite University Professor Doug Graber Neufeld has done studying sand dams in Kenya. The dams’ history, having been introduced at the hands of British colonizers who forced local residents to build them, had to be addressed. But when building these sand dams became a collective endeavor that was cohesive with locals’ community values, they became an effective and climate change-resilient method of water storage.

It’s a field that students at EMU have been calling for more education in – prompting faculty and staff to create a new environmental justice minor.

Professor Jenni Holsinger, who oversees the minor, said student interest has been building in the relationship between social and environmental issues.

“Environmental justice is touched on in multiple courses, but not often named, and students have asked for a more explicit focus,” Holsinger said. “The minor will provide an interdisciplinary space to bring together students who are majoring in natural science programs and with students from other majors.”

The interdisciplinary minor will benefit students going into a variety of fields, including public health, urban planning, public administration, community organizing, humanitarian aid, engineering, and law. It includes an upper level course specifically focused on environmental justice, in which students analyze problems such as water rights, internal colonialism, and pollution, and the social movements that have responded to those issues.

“Our students have a strong interest in the intersection between environmental and the social sciences, and the environmental justice minor will allow them to delve deeper into prevalent injustices around environmental harms and marginalized communities,” said Professor Jim Yoder, director of the environmental sustainability program in which the new minor is housed.

While students can begin working towards the minor now, the new course will debut in the 2021-22 academic year.

“The curriculum is also extremely relevant to events from this summer,” Holsinger explained. “It provides a perspective to help us understand the ways that our experiences with the COVID-19 pandemic are connected to historical and current anti-Black racism through structural patterns of injustice around environmental harms and benefits.”

Participants in the minor will also have opportunities to construct community-based research projects in response to local environmental justice issues.

“This type of experiential learning is a promising way for students to be involved in addressing the interrelated issues of poverty, health, and environmental conditions,” said Holsinger.