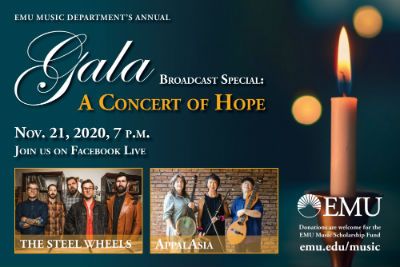 Always the highlight of EMU’s thriving musical culture, this year’s gala will be a “magnificent evening of music,” Berry said, adding that its inspiration comes from arts broadcasts such as the Kennedy Center Honors. And for musicians who have been unable to perform in front of live audiences, the event offers a rare opportunity for artistic collaboration. That joy alone, notes Berry, is worth tuning in for.

“We want this evening to offer a much-needed message of hope and inspiration for uncertain times through a wide array of beautiful, exciting, and eclectic musical performances,” he said in a recent interview.

The gala will be streamed on EMU’s Facebook Live page on Nov. 21 at 7 p.m. [Note that you do not need a Facebook account to access the page.] The concert is free, with 100% of donations benefiting the EMU music student scholarship fund.

Just as in last year’s sensational performance with Phantom of the Opera star Janinah Burnett, the concert will feature the EMU Jazz Band, the Wind Ensemble, Chamber Singers and the EMU Orchestra along with faculty soloists and special guest artists.

“This year, we welcome The Steel Wheels and AppalAsia, two acclaimed groups which will bring a new flavor of roots music and world music to our gala stage,” Berry said.

Classical music radio host Kimberlea Daggy, of the NPR affiliates WMRA/WEMC, will emcee the event for the second consecutive year.

The Steel Wheels, the nationally recognized Shenandoah Valley-based roots music band and a longtime favorite of EMU audiences, is comprised of alumni Trent Wagler ’02, Eric Brubaker ’01, and Brian Dickel ’98, as well as bandmates Jay Lapp and Kevin Garcia. They’ll join the EMU orchestra to give the premiere performance of a new arrangement of “Sing Me Like a Folk Song,” a track off their 2017 studio album “Wild As We Came Here.” [Read more about how the band’s adaptation to socially distanced creativity in this recent feature from “The Boot.”]

AppalAsia is a Pittsburgh-based trio that one music critic has hailed as “one of the most innovative and musically exciting groups” he’d ever heard. The band blends instruments of Western and Eastern origin, combining the traditional Chinese two-stringed fiddle (the erhu), played by Mimi Jong, with the dulcimer and banjo, played by Jeff Berman and Sue Powers, respectively.

Music faculty Berry and Kim Souther will play an original version of Libertango by the celebrated Argentinian composer Astor Piazzola.

Berry is an active concert pianist whose performances have been featured in venues such as Carnegie Hall, Merkin Hall, and the Kimmel Center.

Souther, a multi-style cellist who has toured with the Trans-Siberian Orchestra, is the newest member of the EMU music faculty and serves as director of the Shenandoah Valley Preparatory Music program.

Award-winning baritone and voice professor James Richardson will pair with soprano Kiara Kiah ‘20 in a duet from Mozart’s The Magic Flute accompanied by the EMU Orchestra. Kiah was a winner in the Mid-Atlantic Region National Association of Teachers of Singing (NATS) competition and is a 2020 Cords of Distinction recipient, an honor that recognizes graduating seniors who have made outstanding contributions to the university, community or society.

Led by faculty conductors Benjamin Bergey and Robert Curry, the student ensembles will present a variety of choral and instrumental musical selections ranging from the music of Beethoven through classic jazz standards.