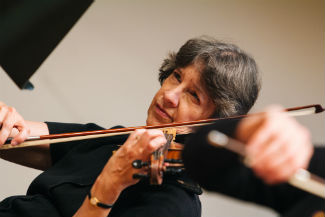 After a school day in the Shenandoah Valley, it’s a sure thing that several hundred children are making music — in part because of the work of Sharon Miller. The longtime director of Eastern Mennonite University’s Preparatory Music Program has spent the last 30 years advocating steadfastly for the expansion of instruction and activities.

Though she has retired from administrative work this spring, Miller’s legacy will continue through the many children whose talents for and love of music has been nurtured by a variety of vocal and instrumental programs. And for this musician, retirement doesn’t mean giving up teaching and performing — it simply allows her to spend more time doing two of her favorite things with people she enjoys.

“I love to see students progress and grow at whatever level they are at, and being with my fellow teachers and the families here at EMU,” she said in a recent interview. “And I look forward to performing with colleagues as well. ‘Retirement’ will allow me more time to do both.”

Miller’s impact was celebrated during a May reception on campus, attended by former students, parents of students, and those in the music community at EMU and from the broader Shenandoah Valley.

“She leaves a rich legacy to EMU, our greater community and so many families, generations, in fact,” said Professor James Richardson, music department chair. “So many lives have been touched by Sharon’s spirit of play, music instruction and music-making.”

Miller joined the fledgling Preparatory Music Program at Eastern Mennonite University in 1989 as a Suzuki viola and violin instructor. It was started in 1988 by Wanda Teague Alger, a 1981 graduate of EMU and “a wonderful Suzuki violin teacher” who moved out of the area the same year Miller arrived, she remembers.

Miller helped to start the youth symphony in its first season in 1990, and then because program director from 1992 to the present. Under her leadership, programming expanded to include the Shenandoah Valley Children’s Choirs in 1991 (now a separate program); Musikgarten in 1992; expanded instrumental lessons in 1994; and the Harrisonburg City Schools After-School Strings Program in 2002.

The result has touched many young people, including the college students she taught as a member of EMU’s music faculty from 1998-2013. The prep music program enrolled 75 students her first year and now has more than 300. The city schools program began with 40 students and now has 210.

Strings in the schools

One clue to Miller’s success has been “quiet persistence,” said her niece Christa Hoover, who has instructed in both programs.

In 2002, Miller wrote a successful grant application, and convinced donors as well, to fund after-school violin clubs. After these clubs expanded to both elementary and middle schools, “she started pushing for curricular string offerings,” Hoover said. “It took years and incremental progress but she never gave up.”

In 2007, HCPS took over funding the program, with EMU’s prep music program contracted for administration and staffing. The 2018-19 academic year was the first time middle school string electives were offered.

Like many other music teachers, Hoover has benefited from Miller’s interest and mentorship.

“When I was a directionless college grad, Sharon got me to move here, started me in Suzuki teacher training, gave me work, and has mentored and encouraged me through my early career,” she said. “I love what I do, and she made that happen! And she has tirelessly done this for dozens of other young teachers.”

A search is currently underway for a new program director. Miller is looking forward to “new ideas in programming and marketing,” she said. “I’d like to see the program reach an even broader audience in the future, thinking especially of senior citizens.”

In the meantime, she’ll happily continue her life’s work: teaching, mentoring and performing.