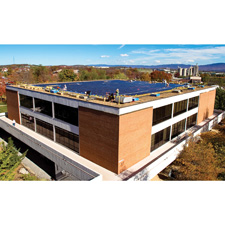 A solar power system with a capacity of 104 kilowatts installed on the roof of the Eastern Mennonite University Sadie Hartzler Library exceeded its performance goals for the period of January through June 2012 by 118 percent.

In addition, the solar photovoltaic system has outperformed projections for the entire period since it began operation in November 2010. The university hosts the solar panels, which are owned and operated by Secure Futures, a solar energy development company based in Staunton, Va.

“Solar energy operators project performance of a system based on how much sun they expect to shine on the geographical area where the system is installed,” said Anthony (Tony) Smith, CEO of Secure Futures and assistant professor of business at EMU.

A combination of a mild winter and particularly sunny weather in the Harrisonburg area from February through June contributed to high levels of solar irradiance. Higher than expected sunshine remains a key factor for the strong output of electric power from EMU’s on-campus solar array.

“Many people may not realize that solar irradiance actually varies from one year to the next, based on local weather. Given the amount of sun that the solar panels at Eastern Mennonite received during the first six months of 2012, the system performed significantly better than expected.”

The solar array on campus was the first in Virginia to exceed 100 kilowatts in capacity. Solar energy is a key component of the university’s program to save energy and promote sustainability.

Through service agreements, customers can reduce their electricity costs and protect themselves against future price increases from electric utilities without the high up-front cost of installing their own solar power equipment.  Secure Futures is based in Staunton, Va., and may be found online at  securefutures.us.