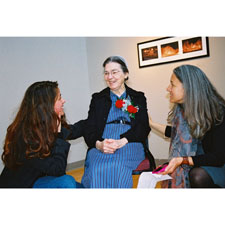 Approximately 200 persons joined together at Eastern Mennonite University Saturday afternoon, March 26, to celebrate a dream of some 10 years coming to fruition.

Facilities that comprise “Phase II” of the University Commons building at EMU were dedicated in a brief, upbeat ceremony held in the renovated MainStage Theater at the south end of the Commons.

In addition to the 200-seat theater, the new or re-purposed space includes the Lee Eshleman Studio Theater, the Margaret Martin Gehman Art Gallery, the Kenneth A. Longacre, Sr., Advanced Media Lab and the expanded and upgraded Common Grounds Coffeehouse.

“We dedicate a place to remind ourselves that space shapes us,” said Nancy Heisey, EMU vice president and undergraduate academic dean. “We dedicate this space to set it apart, to name our intentions for it, to say why it is particular, and why all the care, planning and construction that went into this place were done in a specific way.”

“When we look around this space, we see something different – reused and renewed space, simple space, space for action and vision, space that is like the forms of human expression and creativity that are essential to our full humanity, the expression and creativity that a liberal arts environment is designed to grow, a space where students, faculty and guests will be invited to dig more deeply into the ideas of others, into ourselves, and into our questions and vocations with all the creative gifts God has given us,” Dr. Heisey told the attendees.

The audience joined in a litany led by Andy Dula, chair of the EMU board of trustees and Student Government Co-Presidents Michael Spory and Ben Bergey. The litany, written by Jay B. Landis, professor emeritus of English, called on God to bless the facilities with the aim “to fulfill the university mission of preparing its students with academic strength and faithful commitment to Christian discipleship, service and peacemaking.”

The ceremony closed with the singing of No. 118 in the Brethren-Mennonite Hymnal, “Praise God from whom.”

Following the program, EMU staff led tours on a rotating basis of the Phase II facilities. Each stop included reflections on how each space will benefit students and the larger community.

Dr. Gehman, 88, professor emerita of art at EMU, was present for the ceremonies and reflected on the gallery named in her honor.

“It’s good to see this space used for the arts and to meet former students who are now in leadership worldwide,” Gehman said. She noted that the gallery occupies the same space where she taught physical education classes many years ago.

The late Lee Eshleman, for whom the “black box” studio theater is named, is a 1986 art graduate of EMU. He was an acting-writer creative partner with Ted Swartz of Harrisonburg as half of the performing duo Ted & Lee for 20 years.

The new advanced media lab, named in memory of the late businessman Kenneth A. Longacre, Sr., of Franconia, Pa., will allow classes to expand from nine to 15 students in each class. The computer pods are set up to encourage collaborative work and enable the critique process.

Kirk L. Shisler, vice president for advancement, said the completion of the $2.5 million project “couldn’t have happened without the strong financial and prayer support of many alumni and friends of the university in the midst of a struggling economy.

“We now have facilities that are as vital and vibrant as the already excellent programs offered in visual arts and communication and theater,” Shisler said. “This is a quantum leap forward for students and the larger community.”