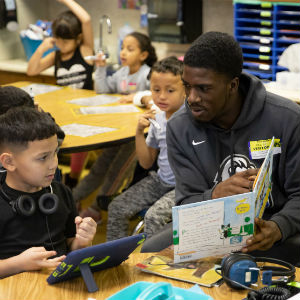 You might think college students, and especially busy athletes, would groan at the prospect of their coach assigning additional reading. Not so for this year’s EMU Runnin’ Royals men’s basketball team.

In addition to classwork, practices and game preparation, the teammates make the short trek to read with Waterman Elementary School students every two weeks. They work with kindergarteners through fourth graders in 11 different classrooms.

“It sure puts smiles on their faces to see you there,” says Tim Jones, a junior business administration major from Forestville, Maryland. “I think it really shows the kids that people outside their school care about them and they know that. They tell us they’re excited for us to come.”

In teacher Lauren Smith’s first-grade classroom, Jones takes one of four stations. Students rotate at 15-minute intervals, so he eventually sees all the students in the class. For free reading time, Jones says there’s “a bunch of books to pick from, but most of the time, they all pick the same book to read.” Before winter break, that meant Jones had nearly memorized the popular choice, No, David!, by David Shannon, about a little boy who is always breaking the rules.

Jones says his favorite book growing up was the Dr. Seuss classic, Green Eggs and Ham.

Kobi Alexander remembers devouring Salt in His Shoes: Michael Jordan in Pursuit of His Dream, co-authored by the basketball star’s mother, Deloris, and sister Roslyn.

“It’s about hard work and staying dedicated to your goals,” Alexander said of the book’s memorable themes. He thinks reading with kids shows that he values reading himself, especially for the way it grows one’s vocabulary and “allows you to see things from multiple perspectives.”

Alexander, a sophomore business administration major from Madison, Virginia, has worked with children on the basketball court but not in the classroom. “This is all about helping people and caring for people and inspiring them,” he said. “It’s been a blessing to play college basketball so giving back to the community and putting smiles on kids’ faces is really rewarding.”

For the record, the popular book among his students, at least in December, was any choice from a series involving Elephant and Piggie.

The Reading Royals program began this year under head coach Melvin Felix, who spent time at Waterman Elementary School while earning his master’s degree. There, he received a warm reception from administrators, teachers and students.

“They were excited to see males as role models, and that was something I wanted my student-athletes to experience,” Felix said. “My main goal is to have them understand they are role models, even if they think they’re not or if they have no experience in that role. Kids will look up to them and I wanted my guys to experience that and have a positive influence in our community.”

The relationship has grown beyond reading time, with the EMU student-athletes being invited to class celebrations and Waterman students coming to home games to see their Reading Royals in action.

“It’s really grown into what I hoped it would be, so I hope we can continue it,” Felix said.

In his spare time, Felix reads books about basketball, lately Toughness by Jay Bilas; The Last Season by Phil Jackson; and The Miracle of St. Anthony’s: A Season with Coach Bob Hurley and Basketball’s Most Improbable Dynasty, by Adrian Wojnarowski.