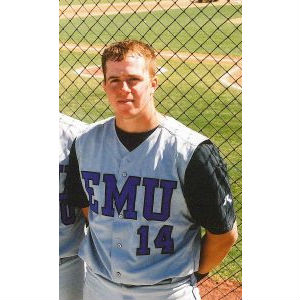 With a busload of Eastern Mennonite University fans in the Nationals Park centerfield stands Friday night, Milwaukee Brewers catcher Erik Kratz ‘02 did not disappoint in his first at-bat, jumping on a first-pitch two-seamer from Tanner Roark for his fifth home run of the season.

But the solo shot on the eve of the season’s trade deadline was not as symbolic of Kratz’s contributions to the team or of exactly why he was picked up in May to aid in the Brewers’ playoff hopes as what happened in the first inning after starter Jhoulys Chacin loaded the bases. Kratz’s visit to the mound helped Chacin eek out of the inning with just one run of damage done and then settle in for six strikeouts and two walks in 6 1/3 innings for the win.

Now with a month of job security ahead of him and playoff hopes alive, Kratz can do what he does best.

“If you’re 38 years old and still catching,” Brewers manager Craig Counsell said in a Sept. 5 USA Today feature on Kratz, “it’s almost assuredly that you’re a very good receiver of the baseball, you have a very good handle on managing a game, you take fast at knowing hitters.”

And he added, Kratz is only getting better. “That’s why he’s still in it.”

As of Sept. 6, the Brewers (79-62) are second in the National League Central division.

For EMU fans, just the sight of a former Royal on the stadium infield was exhilarating enough –regardless of his stats.

“Groundout to grand slam, we cheer for Erik,” said Vice President for Advancement Kirk Shisler ’81, who created and MC’ed the “official Erik Kratz trivia game” as the “team bus” rolled towards Washington D.C. “We tried to get the Nationals folks to put ‘Go Erik Go’ up on the scoreboard but they weren’t buying it.”

This isn’t the first time an EMU group of alumni and friends has made a special trip to see Kratz play – he has a loyal fanship, including many followers of the “Erik Kratz Fan Page” on Facebook – since being drafted by Toronto in 2002. In his 17-season career, he has spent several months close to his hometown of Telford, Pennsylvania, when playing with the AAA Lehigh Valley IronPigs, Pittsburgh Pirates and the Philadelphia Phillies.

But in a pre-game interview, Kratz said this kind of attention from his supporters has a different place in his heart now that he’s drawing near the end of a long professional career. There’s still folks he says who haven’t seen him play in a big league game, for whatever reason. With the Brewers, for example, he splits time behind the plate and his playing time depends on the pitching rotation and other factors, such as injuries.

“Through the years, playing close to home has changed in meaning,” Kratz said. “It means a lot to have support from EMU and the community, it’s truly humbling. Early in my career, I’d say, ‘Come and see me play,’ and now it’s like ‘I’m still out here bangin’’ and people are still coming out to support me. That means something the longer I go in my career.”

Kratz’s professional journey around the minors and into the majors as outlined in Milwaukee’s player biography packet takes up nearly ⅔ of a page – and that’s in six-point font.

Drafted in 2002 after graduating with a degree in business administration and accumulating gaudy college career honors while playing every inning of every game for his four years with the Royals, Kratz reached the big leagues in 2010 with Pittsburgh, and has since played for Toronto, Kansas City, Houston, Philadelphia and the New York Yankees. During each of those seasons since 2010, he was released, granted free agency, traded or purchased by a club 15 times. [For more career details, here’s an excellent and readable career synopsis, which concludes with the observation that “for the fans, he should be one of the easiest players to root for.”]

The Brewers traded Kratz away from the Yankees in late May with the expectation that his journeyman experience would allow him to learn the bullpen quickly and his resurgence at the plate (at AAA Scranton Wilkes-Barre at the time, he was hitting .269 with four home runs, six RBI and a .894 OPS in 17 games) would make up an offensive deficit they sorely needed to balance with everyday catcher Manny Piña.

Kratz belted a homerun in his first game and has earned regular starts since. He’s hitting .255/.294/.379 (these three “slash-line” stats, including batting average, on-base percentage and slugging percentage, are a quick way to judge offensive output) and has lived up to expectations as a team player who is invested in creating success through any kind of contribution, whether that’s working with pitchers or the position players.

Beyond the superficial knowledge of what’s in a pitcher’s arsenal, what pitches he can throw for strikes in what situations, “what he does well and doesn’t do well,” Kratz recognizes performance is rarely an isolated phenomenon – even among elite athletes.

“Everything feeds into it. You ask a guy to dig deeper and there’s nothing to dig deeper in because his two-year-old is teething and that kept him up all night. You know, I think people say that doesn’t affect pitching. It does. Or a free-agent year, or something’s hanging and his elbow’s hurting or his knee… I think that is maybe why God has given me an opportunity to play, to delve into each of these men and what makes them play and play better…  It’s constantly changing and learning more about each person. It’s never-ending. It’s always changing because they’re always changing, from Day 1 to Day 82 of the season. It’s knowing them and being there to listen. The more you talk to somebody, the less they hear. It’s listening and hearing what they say, whether they are putting on a front or being who they are.”

For that balanced perspective and approach that he brings to the game, Kratz credits his wife, Sarah Troyer ‘02 Kratz. (So when a player calls him ‘Coach,’ as happened in the locker room during an interview, that moniker could apply to her just as well.)

Kratz says he’s found it easy to make every sacrifice over 17 years to play the game he loves, except for one: “being away from my family.” Sarah lives in the Harrisonburg, Virginia, area with their three children; the family comes to as many games as possible and cherishes the time they spend together.

Though he’s defined and identified now by his professional baseball career, Kratz says his family life is a daily reminder of the reality that he is much more: a husband and a father, too. And that there is life beyond the game. As he puts it, “at the end of my career, nobody is going to take a bus to watch me do whatever the heck I do next.”

Sarah “is the reason I’ve been able to play as long as I have,” he said. “And I credit her with a lot of the success of our marriage and our family.”

This kind of deep relational grounding, translated onto the field, is one factor to his long career; another is pure and honest effort.

“At the end of the day, I want to know I have given it everything, that I put time in and made the sacrifices and did the best I could in everything I tried to do,” he said. “I think that’s biblical and it was taught to me by parents… I tell this to high school kids and college guys when I talk to them, if you do everything you can within your scope of what your feel is morally correct and within your scope of what is important in life, then that is all you can do.”

Among the fans making the trip from Harrisonburg was Julie Hershey Tieszen ‘92, MA ‘98, who works in human resources, and her husband, Jonathan Tieszen MA ‘03. A longtime Kansas City Royals fan, Julie Tieszen was delighted when Kratz logged time there in 2014 and 2015. Though he didn’t play in the World Series, he did earn a ring (teams commission their own rings and decide who gets them; awardees can include former players, executives and anyone who played a part in the team’s success).

With a trio of former Royals on the team – Kratz, Lorenzo Cain and Mike Moustakas – along with another new acquisition, Miami standout Christian Yelich, she has kept following the Brewers. “Erik’s having the best season of his career,” said Tieszen. “The team has definitely been exciting to watch.”

No matter what happens, Kratz is enjoying every moment – and so are his fans. The player who has been tagged by television play-by-play announcers on occasion as “the pride of Eastern Mennonite University” is indeed.