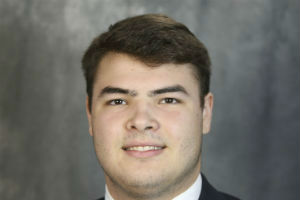 Time stood still for Eli Hanback, who grew up a UVA football fan, as he fell on a Hendon Hooker fumble in the end zone, clinching Virginia’s 39-30 win over the Hokies on Black Friday, ending the Cavaliers’ 15-game losing streak to their in-state rivals.

“That touchdown against Virginia Tech is a feeling, I don’t know if I’ve ever felt before my life. I mean, it was like, what everyone says it’s those moments where stuff goes quiet around you, and you don’t hear anything else. It was one of those moments. Like, it was unbelievable. I can’t describe it,” said Hanback, who is now prepping for the 2020 NFL Draft.

With the world currently shut down, Hanback is doing what he can in what he calls his “jail yard,” a basement workout setup with “a few weights and a stationary bike.”

The 6’3”, 300-pound defensive tackle is getting some interest from NFL teams that use a base 3-4 defensive front.

Nose tackles with experience in the 3-4 are a premium, since you don’t see a lot of teams at the college level using the 3-4.

The role of the 3-4 nose is to eat up blockers in the middle, to free up linebackers to be able to pursue ball carriers in the run game, and allow defensive ends and outside backers to get pressure on the pocket in passing situations.

“I know I need to improve on the pass-rush side, and I have been improving it with that, but I’d say when it comes interest right now, from what I’ve heard, it’s a lot of teams that run three-down. There are teams that run four-down who I think have looked at me and like me a little bit. But I think it’s gonna be mostly three-down teams just because that’s where most of my experience came,” Hanback said.

Losing out on UVA’s scheduled April 8 Pro Day was “kind of a bummer” to a guy being projected on the Round 7/undrafted free agent cut line.

He was able to take part in an informal virtual pro day recently, “but, you know, it’s not the same as having all 32 teams there, and having those scouts work you out and, you know, not being able to go to like local days or team visits was kind of a bummer,” Hanback said.

That’s in the near future, with the draft next week.

Looking back on his UVA career, “being able to be part of the program, during a time where it’s ascending and getting really good, and accomplishing the things we accomplished, was an awesome thing that I’ll remember for the rest of my life.”

“And, you know, for future players to come, I’m glad that I was, you know, part of that, you know, time period where we were put, I guess, or held to a higher standard that they’re going to be able to experience,” Hanback said. “And being able to beat Virginia Tech, as you know, that’ll be a memory I’ll have for the rest of my life, too. That was one of the greatest moments of my life, and you know, winning the Coastal with that, and getting playing in the ACC Championship and going to an Orange Bowl, we experienced so many awesome things that a lot of guys before us weren’t able to experience”