Lila Marks describes Hawaii’s landscapes as “effortlessly beautiful,” but when the Eastern Mennonite University photography major traveled there this summer for her senior project, she had something else on her mind, too: Hawaii’s homelessness rate, the highest of any state. 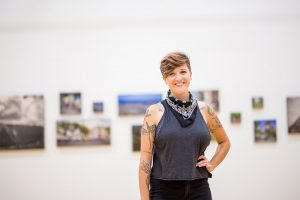 Lila Marks, a transfer student from Washington D.C. area, hopes to return to Boat Harbor in Waianae. A portion of the proceeds of her sales will be donated to the homeless community there.

The resulting exhibit, called “The Ignored,” features 75 frescos showing Hawaii’s beauty but also portraits and candid portrayals of homeless people and images of and from the Boat Harbor, an organized community of “houseless” people led by a matriarch. The frescos range in size from 5×5” to 24×36” and are created by transferring a print made on plastic onto a wooden surface.

The senior show, required for photography majors, is one culmination of Marks’ education at EMU, a place she came to as an older transfer student with a goal of becoming a more skilled photographer.

“Lila goes after photography like someone who got to the party late and wants to make sure she gets it all,” Professor Jerry Holsopple said. “What will make her a great photographic storyteller is that she cares about the woman dying of cancer, or the one challenged by a debilitating disease, or by the pain of being homeless in a paradise. I hope she never finds the easy answer.”

A serendipitous leap to EMU

Marks said that becoming a photographer and studying at EMU started on a whim. She’d been studying global affairs at another university, but didn’t feel passionate about her coursework. She dropped out, and used her student loan money to buy a camera.

“It was for no reason,” she said. “I had never really taken photos. I just thought I should do it.” She started taking a lot of pictures, “filling up memory card after memory card,” learning, getting better. Eventually, at age 25 and living in Harrisonburg, she realized that she couldn’t imagine her life without photography in some capacity.

She was taking classes at a nearby community college, “for no reason other than I felt like I should be in school,” when a professor told her that EMU’s Holsopple “was a ‘crazy genius,’ and I should apply for EMU. I was like, ‘EMU? I don’t know.’ I’m not Mennonite. I didn’t even know then what being Mennonite was.”

Though she said it was a “leap, and probably serendipitous,” Marks surprised herself by both applying and being accepted into EMU. But it wasn’t until she was on a cross-cultural trip led by Holsopple to Lithuania that she finally decided: “OK, I can do EMU.”

Holsopple, she said, has been “a huge mentor to both my personal life and my photographic life. I don’t know if I 100 percent believe in fate, but only good things have come from being at EMU in my life.”

The cliche of Hawaii — and its crisis

It’s expected to see homeless people in big cities, Marks said. She grew up in Washington D.C., and was always fascinated with homeless people: She’d go around the city with a bag of fast food, just talking to them and “hearing their stories.”

For this project, though, Marks was drawn to Hawaii, where for most island visitors homelessness is just a disregarded subtext overshadowed by natural beauty.

“We all have these cliche’d views of what Hawaii is and what it should be,” Marks said, when in fact the state is facing “a crisis that doesn’t get talked about nearly as much as it deserves.”

The exhibit’s title “The Ignored” has two meanings. First, it reflects the reality that society often ignores homeless people.

“We’d rather not see them or deal with them,” Marks said.

But there was another reason, too, that she gave the exhibit its name: while working on the project, she often felt ignored. Whether it was due to homeless people’s sense of self-preservation, or her awareness that approaching someone on the streets of Honolulu could cause discomfort or suspicion, or her own sense of vulnerability as “a small female, unarmed, with a nice camera,” the difficulty of meeting and connecting with homeless people at some times left Marks discouraged.

“It was an immense challenge to even to make initial eye contact,” she said, so she developed a plan: smoking cigarettes “kind of close to groups, in hopes that I would capture someone’s attention.”

“They actually worked,” she said. “They were my biggest tool in doing street photography.”

But successfully starting a conversation didn’t always mean that things would go as planned. While Marks wanted to talk about homelessness more broadly, many people she met instead were focused otherwise, on day-to-day realities or maybe remembering “glory days.”

Marks had also thought she would come away from her trip with “some sort of culmination, or a solution, and idea of what I felt like should be done” about homelessness — but that didn’t happen.

“When I got back I just had bits and pieces of everything, sound bites. I never felt like there was ever any uniformity even in the struggle of being homeless, any concrete thread. Every single person’s different,” she said.

Marks hopes to return to Hawaii to “dig deeper. A month is not a very long time when you’re trying to do something with the enormity of homelessness or mental illness or addiction,” she said. “A month was a really, really short amount of time.”

For now, Marks plans to donate 10 percent of the profit from the show to the Boat Harbor community in Waianae, which she said is a “large and unified community” that is fighting for their right to stay on public land.