Early-season apples get a boost from abundant rainfall 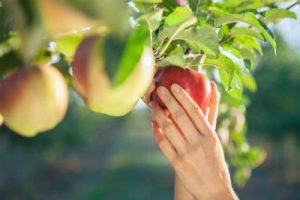 Early-season varieties of Virginia-grown apples are now ripe for picking despite adverse growing conditions throughout the spring and summer.

According to the National Agricultural Statistics Service Aug. 16 crop report, 25% of Virginia apples have been harvested, down 4% from this time last year.

Fruit growers are attributing the lag to a series of mid-May freezes, an event that already has hampered yields for sweet corn and winter wheat.

“This spring was extremely cold,” said Dudley Rinker, who operates Rinker Orchards in Frederick County. “It’d be below freezing three and four nights at a time, and we had a good bit of frost damage, frost rings and misshapen fruit.”

Rinker said he also contended with an extended period of hot and dry weather throughout July and early August. However, nearly 4 inches of rain has fallen in the Winchester area since the start of August, so Rinker expects to begin harvesting soon.

“The quantity isn’t what we would’ve liked to have because of the cold weather in the spring, but there’s not a whole lot we can do about that now,” Rinker said. “But the recent rains we’ve had have helped turn things around and helped the fruit grow. The rain came in the nick of time.”

Levi Snapp, manager of West Oaks Farm Market in Winchester, said his farm is harvesting Ginger Gold apples, and Gala apples will soon follow. He also noted the recent rain has helped his crop recover from the damage done by the May freezes.

“The crop that made it through the frost and is sticking around seems like it will be good, and because of the rain we’ve had in August, the apples will be nice and large,” Snapp said.

John Marker, who grows 24 varieties of apples at Marker-Miller Orchards near Winchester, noted his crop is coming in about a week late compared to last year. Despite the delay, he’s harvested Ginger Gold, and said he will soon be picking Gala and Honeycrisp.

“A little bit more rain would be nice, and we’re looking for cooler nights in September,” Rinker said. “Those cooler nights will give the fruit time to mature and have better flavor.”