Earl Hamner blows me away 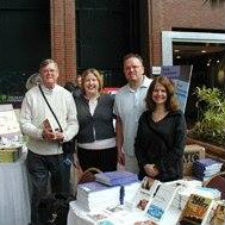 “Hi, Chris. I am out most of the day, but will find you somehow. Reception, maybe? Earl H.”

This was what greeted me to the Festival of the Book over in Charlottesville the other day.

A handwritten note on a cocktail napkin – from Earl Hamner, whom I had interviewed back in November for a story in the inaugural print edition of The New Dominion.

We talked on Election Day – “I won’t be able to do much that day, except sit and wait to see how things turn out,” said Hamner when we talked about the interview beforehand.

He was so gracious with his time that day – the creator of “The Waltons” gave me an hour to talk about his childhood in Nelson County, his time in Paris during World War II, his years of working his way up the ladder in radio and TV and movies, how he hopes to live to be 150 so that he can get everything done that he still wants to get done.

We ended by talking about how we were both supposed to be at the Festival of the Book – as it turns out, me speaking with five people in a bookstore on The Corner, he regaling hundreds in a grand ballroom downtown.

The gulf wasn’t even on the radar of the man whose TV shows and movies have made him a household name the world over.

“I would be most thrilled to meet you, Chris. Please do look me up when you are there,” he said to me as we signed off.

Fast forward four months, and there he was.

“Excuse me. Can you help me find Table 27?” he said, giving the number of the table that we had been assigned at the Omni Hotel on Saturday.

“That’s us,” my wife answered, knowing immediately who it was.

Earl pumped my hand like he was the gushing young writer and I was the established auteur.

We talked for a few minutes – me turning the tables on him and going into detail about how nice it was that he had gone out of his way to give me so much of his time for my magazine piece a few months earlier.

He shrugged that off – then after more pleasantries said that he had to be on his way, to some event or the other that was calling his name.

He was hosting the author’s reception that night, after all – he didn’t mention that as we talked, but I assumed that he would have some things to do to get ready for the capper to the annual festival.

So we bid adieu – or so I had thought.

About 20 minutes later, he returned – with a camera.

“I want to get a picture of you two,” he said, motioning to Crystal and me.

The big-name writer – and one in whom I had confided that had been an inspiration to me growing up on the other side of the Blue Ridge from Nelson County, like Earl’s John Boy a kid from a poor family who dreamed of going off to school and becoming a writer – he wanted to snap my picture.

“You have to be in the picture with us,” Crystal insisted, and a friend stepped in to man the camera.

He did – reluctantly, but he did.

A flash of the camera, and he was off again – waving and smiling, again, like the gushing fan who had just had the fortune of being able to get an autograph from his favorite person in the world.

“Doesn’t that blow you away?” Crystal asked me as we packed up a few hours later at the end of a long day.

Yeah, that Earl Hamner blows me away.