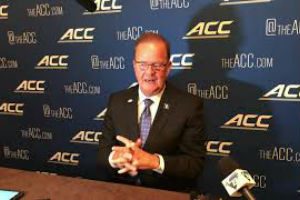 Chase Brice isn’t exactly an untested rookie heading into his first start at QB for Duke on Saturday at Notre Dame.

You might remember the Clemson grad transfer saving the Tigers’ season in 2018 in relief of Trevor Lawrence, rallying Clemson from a 23-13 fourth quarter deficit to Syracuse in Death Valley, getting the 27-23 win on a 94-yard drive that Brice extended with a 20-yard completion to Tee Higgins on a fourth-and-6 at the Clemson 48.

But Brice, a four-star recruit in 2017, was never going to beat Lawrence to be QB1, so he made the trek to the Triangle, and won a three-man battle with Chris Katrenick and Gunnar Holmberg to lead the Blue Devils offense.

And he’ll be doing so for noted quarterback guru David Cutcliffe, whose disciples include Peyton and Eli Manning, and 2019 NFL first-round draft pick Daniel Jones.

Cutcliffe cited Brice’s experience as a key in going with him as his starter.

“Chase, you know, as he got more comfortable with our system, what you started seeing was his experience,” Cutcliffe said. “He’s played a lot more football at this level than the other two have. Chase played a lot of games and saw a lot of game time at Clemson. You could see that pocket movement, and him just feeling natural in a pocket, the timing mechanism of throws, and as he got more comfortable, his accuracy level grew in all of the throws, whether it was deep balls or intermediate short layoffs.

“He just became more and more the most comfortable quarterback on a day-to-day basis. As the week closed out last week, I think it became more obvious and then we made the decision to start him at the Notre Dame game.”

Cutcliffe hasn’t yet settled on who the backup is between Katrenick and Holmberg.

“That’s completely fluid right now. And it might be the situation of the game or the circumstance. Both of those guys have great strengths. Chris Katrenick is really a master of our system. Throws the ball really well and is more of a drop back guy. Gunnar’s throwing it really well. But Gunnar gives you the dual-threat. He’s got a lot of speed and a lot of things that he brings to the table. So again, it would be the circumstance right now as they’re bracketed both as number two,” Cutcliffe said.

Cutcliffe was coy on whether or not he plans to use either of the backups, and probably in particular Holmberg, in short-yardage situations, as he has made a practice of doing in years past.

“You know, that’s always a possibility,” Cutcliffe said. “Right now, it’s not the highest priority level for this ballgame. The uniqueness of our practice and the experiences we’ve had to deal with during camp, the amount of time we can put into different things, is more limited than what it’s been in the past. But that’s certainly a possibility that you could see, you know, either one of them in this game. But I’m not ready to say I want to go into the game with that mindset. We’ve got a starter. We’re going to go play and go play that way. I think that’s the best approach to start the season.”