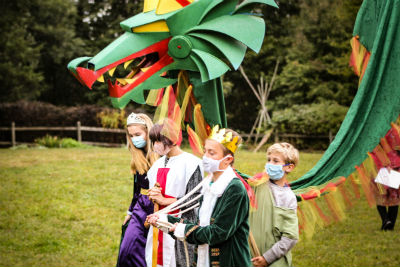 Students lead the captured Dragon after the battle. It will now be put to work for the good of all. Photo courtesy Charlottesville Waldorf School.

In Waldorf Schools around the world – particularly those in the Northern Hemisphere, where the holiday coincides with the cooler weather and increasing darkness – Michaelmas is a beloved and highly anticipated annual celebration.

Michaelmas, or the Feast of Michael and All Angels, falls near the Autumnal Equinox on the calendar and is often the first Festival celebrated during the school year in the Waldorf School. There is usually a harvest aspect to the celebration, apple cider and pumpkin muffins are a staple! The fiery colors of the dragon are reflected in the changing leaves and the pageant costumes of the students.

The Michaelmas Pageant tells the legend of Saint George conquering the dragon with the aid of the archangel Saint Michael, freeing a noble princess from a horrible fate. Rather than kill the beast, Saint George tames it and the villagers take it in and teach it to plough the fields, overcoming their greatest fear and putting it to work for their advantage.

At the Charlottesville Waldorf School, students typically produce this pageant, with each grade taking a role: first graders are the gnomes who help Saint Michael forge the steel, third graders play the villagers, sixth graders are the dragon – maneuvering the oversize puppet head and long dragon body – and grades 7 and 8 are the royal court, Saint George and Saint Michael. The pageant has taken several forms, but is usually held in the school’s outdoor Pavilion with an audience of family and friends.

This year, pandemic protocols prohibit visitors to campus and make gathering closely together problematic. No fear! The school festivals committee huddled and emerged with a new plan so the show could go on.

Each grade played their regularly assigned parts, but the entire production was spread out across the playground and the classes kept to their “pods”. Parents could not come, but many photos and videos were taken throughout so the experience could be shared.

“The story and the performance itself are what is at the heart of this festival,” says CWS School Director Amanda Tipton. “Our gift to the students is setting aside a day to stoke the fires of our courage, remember our strength-giving connections to earth and sky, and take up our place in the ongoing struggle of good against evil.”

An archangel in the Christian, Jewish, and Islamic traditions, Saint Michael here represents the courage of each individual. Waldorf schools around the world celebrate Michaelmas because it is a reminder that the dragon and the saint are both within us, the dragon representing cold rationality with no moral compass, leading us to evil, and the archangel Michael demonstrating the inner strength, initiative, and selflessness we must nurture in order to conquer our fears and anxieties and harness them to serve our more noble purposes. Into darkness, fear, apathy and depression, Michael wields his sword of light that we may be inspired to face inner and outer darkness with renewed strength of will and purpose in our lives. And, especially at this time, could we ask for a better inspiration?