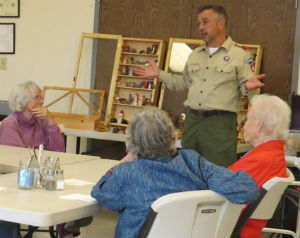 Members of Timberville Broadway Senior Center and Price Rotary Senior Center were pleased to have Doug Driver, president of Lantz Construction, come and visit this week.

Doug brought his wood carvings that he has made over many years to show the members of TBSC and PRSC. Doug showed us carvings of famous people such as Bill Clinton, Abraham Lincoln, Santa Clause and Indians just to name a few. He also has carved many animals from cats and dogs to rams and bears. Doug started this hobby when he was a Scout leader. So he was also able to share some stories about scouting and their history.

Thanks, Doug, for sharing your hobby with us!