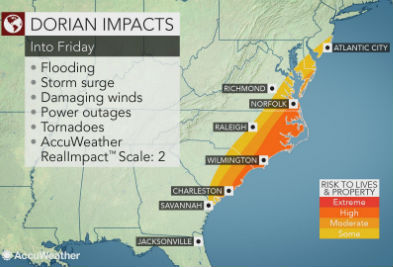 As Dorian grows in size and intensity, unleashing a broader area of strong winds and heavy rain, the eye of the hurricane may make landfall along the coast of the Carolinas, while making a northeastward turn into Friday.

As of 11 p.m. EDT Wednesday, Dorian regained Category 3 major hurricane status with maximum sustained winds of 115 mph. As of 8:00 a.m. EDT Thursday, winds remained at 115 mph as the hurricane was moving north-northeast at 8 mph.

“Even though Dorian is weaker than it was when it devastated the northern Bahamas on Monday, the tropical-storm-force wind field has expanded outward to a maximum of 175 miles and the hurricane-force wind field is now out to 60 miles from the center,” according to AccuWeather Hurricane Expert Dan Kottlowski.

The immediate coast from South Carolina to North Carolina can expect hurricane conditions with gusts at or above 74 mph, coastal flooding with a storm surge of 4-7 feet, torrential rainfall average 6-12 inches with an AccuWeather Local StormMax™ of 15 inches.

AccuWeather Chief Broadcast Meteorologist Bernie Rayno cautioned strongly that Dorian would make a landfall in South Carolina or North Carolina as the storm turns northeastward. By this point, Dorian may be a Category 2 hurricane.

Some roads to the barrier islands in the region will be cut off due to high water and powerful winds. Each high tide cycle will bring progressively higher water levels until the storm passes by to the northeast of a location.

Damaging winds, moderate flooding and storm surge are expected along the coast of the southeastern United States. As a result, Dorian’s impact is projected to be a 2 on the AccuWeather RealImpact™ Scale for Hurricanes.

Along the coast, the long-duration high water levels and pounding waves will result in moderate to major beach erosion.