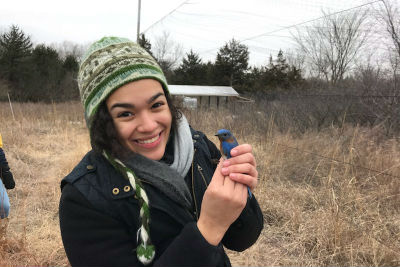 Twice a year, migratory birds in North America embark on journeys that can carry them hundreds of miles each day. In their quest to seek optimal breeding ranges in the north and wintering grounds further south, birds travel up and down the Western Hemisphere while potentially carrying diseases across borders, over oceans, and through various ecosystems.

Krisangel Lopez, a first-year Ph.D. student in Jonathan Auguste’s lab at Virginia Tech, received a Fulbright Fellowship to research how migratory birds can transmit diseases and which pathogens they may carry. When it’s safe to travel again, she will spend a year at the University of the West Indies in Trinidad and Tobago.

“We know that there’s a very large population of birds that winter in Trinidad, so we wanted to look at what viruses are being introduced during the winter months and the likelihood that these birds can bring new viruses into North America,” said Lopez.

Birds like the barn swallow spend the winter months in Trinidad and might stop in Virginia on their journeys back north. By screening birds for various diseases in both Trinidad and Virginia, Lopez will determine which types of vectors — like ticks, mites, and fleas — hitched a ride on the birds. She will also examine the arthropod community (specifically ticks, mosquitoes, and fleas) to determine which arthropod-borne viruses — known as arboviruses — birds may carry during their long journeys. These viruses can cause significant illnesses in both wildlife and humans.

Since birds can spread diseases rapidly and over a wide geographical range, scientists study them to better understand their potential to act as a reservoir species, or a species that acts like an incubator until the disease can infect a host. Additionally, studying the transmission of a disease can help researchers predict the pathogen’s emergence potential, or when and how the pathogen might emerge in the future.

For example, Powassan virus is an emerging tick-borne disease that causes swelling around the brain and spinal cord in humans. It has been detected in chickens and backyard birds in northern latitudes, but Lopez said that studies on Powassan virus in wildlife are still limited. In the lab, she analyzed tissue samples to determine if birds can play a role in the transmission of the virus and what those implications might be.

“Arboviruses remain a significant cause of morbidity and mortality worldwide, and they continue to emerge unexpectedly. Dengue virus alone affects around 350 million people annually. Forecasting the emergence of new arboviruses with pandemic potential is critical to developing appropriate intervention strategies to reduce their outbreak potential and/or diminish their associated disease burden,” said Auguste, an assistant professor in the Department of Entomology in the College of Agriculture and Life Sciences and an affiliated faculty member of the Fralin Life Sciences Institute.

Lopez is broadly interested in infectious diseases and public health. After completing her undergraduate degree at Villanova University, she spent a year working in Peru with Bob Gilman, a professor at Johns Hopkins University, to study the effects of climate change on disease transmission in communities. As a fluent Spanish speaker, Lopez connected with families to explain how good hygiene and healthy habits can reduce the transmission of potentially fatal diseases.

When Lopez returned to academia to complete her master’s degree at the University of Oklahoma, she studied how viruses circulate in avian communities. Part of her lab work took her to the University of Texas’ medical branch, where she met Auguste, her future advisor.

“I mentioned [to him] that I was interested in pursuing a Fulbright, and he said, ‘I think it’d be really neat if you did something like that in Trinidad.’ Then he introduced me to a number of people there, through his collaborators in Trinidad. We put in a Fulbright application in 2018, and I was waitlisted for that year. Then I decided to pursue a Ph.D. after my master’s work. I submitted a second Fulbright, and then I got it,” Lopez said.

Beyond her field and lab work, Lopez will work directly with the community and hopes to engage more children in science. She plans to teach kids more about biodiversity and conservation while also providing tips for preventative healthcare practices to do at home, like building homemade mosquito traps.

“Other than the biodiversity, which I’m really excited about as a biologist, I’m excited to work directly with the community, which goes back to what I did when I was in Peru. I grew up in the Caribbean as a kid, and I wanted to go back to my roots. I thought this would be a good way of giving back to the community and continuing the work that I’ve always wanted to do,” Lopez said.