Divac on Kyle Guy: ‘One of the best shooters in this draft’

Front Page » Sports » Divac on Kyle Guy: ‘One of the best shooters in this draft’ 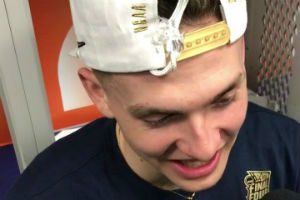 The Sacramento Kings have a plan, and that plan seems to include lights-out shooters like UVA guard Kyle Guy.

The Kings didn’t have a first-round pick in this year’s NBA Draft, but did have a trio of second-round picks, all of which they used on shooters.

The team took Justin James, a 6’7” shooting guard from Wyoming with the 40th pick, then went with Guy at 55 and Vanja Marinkovic from Serbia at 60.

General manager Vlade Divac has been leading the rebuild in Sacramento with an eye toward building the Kings on tempo – Sacramento played at the fifth-fastest pace in the NBA in 2018-2019 – and shooting – the team was fourth in the NBA in three-point shooting percentage last season, at 37.8 percent.

“Shooting, basketball IQ, run, that kind of stuff,” Divac explained the approach to reporters after the draft. “You saw that last year, and basically we’re going to continue to play that way, and we need the players that can fit our style, and I think all three of them are good fits for us.”

Divac conceded that Marinkovic may not be in the mix for a roster spot in 2019-2020.

The GM also thinks Guy may eventually need to develop as a combo guard because of his size – at 6’2”, 168 pounds.

For now, though, Divac sees Guy as a shooting guard.

“I could say a lot of stuff, but his shooting is just exceptional,” Divac said. “I don’t know if I can say it (definitively), but I’m very confident he’s one of the best shooters in this draft. He’s just unbelievable.”