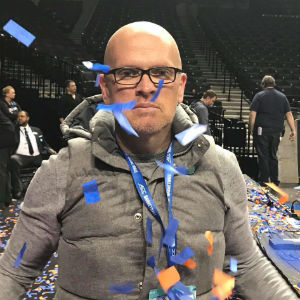 A couple of Saturdays ago, before leaving the Barclays Center, I scooped up several handfuls of confetti from the floor, to take home, to be able to remember that moment in UVA basketball history.

I didn’t think for a second on the long drive back from Charlotte last week about trashing the orange and blue scraps.

It didn’t end well, the 2017-2018 season, that was an almost literal roller coaster, beginning with the team being picked by the media to finish sixth in the ACC, and not getting included in either of the national Top 25 polls, before the steady rise to the program’s first #1 national ranking in more than 35 years, the third ACC regular-season title and second ACC Tournament title in the past five years, then, yeah, the dispiriting loss to UMBC.

You ask me, diehard UVA basketball fan in addition to being a guy who gets to sit in the media section at JPJ and courtside at ACC Tournaments covering the team, if I think this was still a memorable season, and I respond, seriously, you even have to ask?

It didn’t end well, but then, what doesn’t end well? I hate to be that guy, but only one team ends their season winning the championship game.

And you could argue, well, they could have won a game, gotten to the Sweet 16, the Final Four, the championship game.

And I’d respond, OK, then the headlines are, Tony Bennett-coached UVA loses in the Sweet 16, Final Four, championship game, still can’t win the big one.

The fan in me loves that the program has those kinds of expectations. I’ve said this on my podcasts a lot lately, but it bears repeating for the purposes of Google here, that back in 2006, when I co-wrote a book on the history of UVA basketball, and wrote the chapter on the Ralph Sampson years, I remember vividly what I was thinking about that era, specifically, that it was something that had happened, was nice, was awesome, whatever, and that it would never happen again at UVA.

We were writing the book between years 1 and 2 of the Dave Leitao era. I’m sure I wasn’t the only person thinking then, just get us back to an NCAA Tournament. Maybe we can get back to winning 20 games, finishing middle of the pack in the ACC, win a tournament game every so often.

That was the ceiling for me.

I couldn’t fathom winning the ACC, ever winning an NCAA Tournament, getting back to a Sweet Sixteen, having a double-digit lead in the final 10 minutes in an Elite Eight, finishing the ACC Tournament with a 31-2 record, being a missed shot at the end of a one-point overtime loss away from a perfect ACC season.

So, now, no, none of us can still fathom how it all came crashing down in a span of six days.

But I tell you what: I wouldn’t give any of it back, the ACC 17-1 regular season, the ACC Tournament, the confetti, any of it.

Let’s just say that maybe the ‘Hoos meet preseason expectations, finish sixth in the ACC, don’t get ranked in the Top 25, get a seven or eight seed in the NCAA Tournament, and lose in the Sweet Sixteen.

That’s four months of so-so for a week.

We had plenty of those seasons after Ralph left and before the program started tanking in the last couple years of Jeff Jones.

You can’t tell me that you’d rather go back to those days.

There’s one more step that needs to be taken, obviously, winning in March. That will come.

UVA basketball is thisclose to being the dominant program in the most dominant conference in the country.

There will be more confetti. Allow yourself a minute to enjoy the ride.